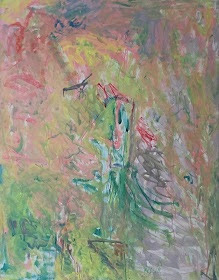 What painting would you save from a fire? It just so happens that I have such a painting. A Milton Resnick oil on canvas from 1959.

Milton Resnick, the sublime master of abstract expressionism. The painter's painter. The painter's hero. The pioneer who redefined the fabric of space in paint. Primordial. Godhead. The birth of creation. Milton Resnick, the Russian Jew who came to this country as a boy, worked in the WPA, fell in with de Kooning and Pollock and the Tenth Street, Cedar Bar crowd. Milton Resnick, who rose to become synonymous with gravitas, the godfather of the New York School. Milton Resnick, whose vast canvasses brought the viewer face to face with our most basic questions; tremendous, awesome, serene, sometimes frightening paintings that brush stroke by brush stroke touched both being and nothingness.

And then, thank goodness, there are these other more frivolous questions, fun questions. What if you were trapped on a deserted island and could have only one book, or one album, or one fruit, or one other person, etc., who or what would you choose? Always a pleasure to ponder.

Funnily enough I have a painting that answers both questions.

Around 1959 we had a fire in our home on Winthrop Rd in Shaker Heights(forgive me if you've heard this story.) I was down the street goofing off with plastic pail and shovel in a sandbox with my best friend Hanky White. When fire engines roared by, sirens blaring, of course we ran after them. When they stopped in front of my house I couldn't have been more thrilled or more proud. There was my home up in flames, clouds of black smoke billowing out of the roof with devilish tongues of flames licking the sky. Men with axes in fire hats and glistening black oil coats marshaled hoses and started shooting water in beautiful arcs. In the thick of all the chaos, standing in the middle of the lawn, in her underwear and a top, stood my mother clutching our Siamese cat, and a painting by Milton Resnick.

That's how I remember it anyway, and of course there is much, much more to the story. The point however is clear. Here is a painting that was literally saved from a fire.

It is also the painting that has been in my life my whole life, like a mooring. I have looked at it everyday one way or another for over fifty-five years. In passing, in contemplation, in earnest, lost in thought. I have studied it, curated it into shows, hung it in a million places, and even rescued and restored it after it was damaged in the late Seventies.

And always it has shown me something different, something new. It is never the same, but seems to change with each passing day. It is as quixotic and enigmatic as Mona Lisa's smile.

Posted by Addison Parks at 7:24 PM