The following is an essay from the March/April exhibition at the Bow Street Gallery in Harvard Square.

Leon Polk Smith(1906-1996), Charles Seliger(1926-2009), and Richard Tuttle(1941-) were never Minimalists, but that reductivist art movement dominant in the late 60’s and early 70’s is the elephant in the room at Bow Street; an elephant with wings, funnily enough, that soars around, flits around, and hovers over this tribute to these three great artists.

Leon Polk Smith is credited with inspiring some of Minimalism’s most influential founding members, artists like Agnes Martin and Ellsworth Kelley, who were forever and instantly changed after visiting his New York studio as young artists in 1957 and witnessing the morning light clarity and vitality of his hard edge abstractions. Smith had years earlier distilled his three major influences: Mondrian’s severe geometric matrix; the flat Oklahoma plains of his childhood; and stark graphic images in printed matter, and with them he ascended high over the skyscrapers of the truly modern city he loved so much; they gave him his wings. His modernism was more rooted in a kind of Frank Lloyd Wright pioneer American spirit than as it was the Bauhaus purism of Gropius and Albers imported from Europe. Ultimately his painting was an organic poetry wrought from a Native American past and a passion for a brave new world.

Charles Seliger was like one of those Americans that lived in London and became more American for the experience, the way they say the English in the colonies were more English than English; his particular brand of biomorphic and automatic abstraction only became busier, more complex, more layered, and more ambiguous as Minimalism put its stamp on the art world.  As they pared off he only too gladly piled on, doing what artists do, resurrecting what others cast off. Still, his work also became smaller at that time, which is worth considering. If the Minimalist credo of "less is more" became the rallying cry of a generation; Charles Seliger spent his life proving that "small was big!" Where Minimalism became rigid and cold and mechanical, Seliger offered an oasis of relief on the head of a pin--a lush and intimate universe, an alternative future to an otherwise dehumanized 1984!

Richard Tuttle, on the other hand, took the movement in stride, striding along side it, got the point because it was already inside him, and kept moving; to him it was all matter of fact, part of the landscape; and although many thought him to be one of theirs,  he never was, and never would be, never a joiner enough to be a member of that club that would have him as a member. Not that the group chased Tuttle away, he just planted his work somewhere else, not in group think, but in some personal journey, some profound inquiry, quest if you will, a path wholly defined by the absolute necessity of freedom. The individual and stubbornly American spirit once more! He might have breathed the same air, gulps of Frank Lloyd Wright inspired Tony Smith, gulps of Leon Polk Smith inspired Ellsworth Kelley, gulps of all the artists that ever exhibited at the Betty Parsons Gallery where he apprenticed, including Leon, and Kelley and Martin; but no, he was always artist as individual, riding alone, out on the vast frontier, forever on the lookout for what he called "fresh meat," picking up diamonds where others gathered trash.

And in this they all shared. Always the individual, always the artist, always the poet, always unsinkable in their optimism where life and art were concerned, and always grateful for what art meant to them and the world, fiercely so, because life demands nothing less. And for that Bow Street is very grateful indeed, for them, to celebrate them, to cheer them, to honor them. So thank you! Thank you very much Richard Tuttle, Charles Seliger, and Leon Polk Smith!
Posted by Addison Parks at 11:07 AM No comments:

Always in the Room

It is sometimes easy to forget that during most of the 20th century, there was always one guy in the room, one guy in the back of everyone's mind, that in the night sky every star in every constellation was outshone by that big round smiling moon! And every artist for almost a hundred years felt mooned by that greatest of French artists, who of course was actually Spanish! In that way that the biggest loser of every NFL season is the Superbowl runner-up,
we will always feel a little sorry for Braque, who really was French!

Art history, like all history, is very tidy. We get to observe every artist on a pedestal, or in a context. We get to pour over their body of work and actually forget that every time they finished a masterpiece they suffered the knowledge that the world cared more about what that guy scribbled on a napkin. Say what you like, but every big shot, every Kandinsky or Mondrian or Pollock or Bacon or Modigliani or de Kooning or Miro or Morandi or Warhol or Moore played a distant second fiddle to that guy.

The Tidiness of art history rarely tells us that you could never have Marsden Hartley in a room with Man Ray, or Duchamp, much less Franz Marc, or Diego Rivera, but you could and did. For an excellent example of the sheer mess of the art world just look at the Armory Show of 1913 that finds Duchamp with Delacroix, and Courbet with Hopper! Life clashes everyday but art history is a well hung room at the Met with all the right people in it. The truth is that every room at the Met in real life should have that tan grinning bald man standing there in his stripped shirt! Front and center!

When I was a boy in Rome I got to sit at the knee of a woman who had regularly bounced on his knee as a toddler in the Paris of the early Twentieth Century. Her father was his friend and fellow artist, the Italian Futurist Master Gino Severini, who like many painters had also made Paris his home. When he was in Rome she would take me to see him and he would tell me things like how to cast sand onto wet plaster and let the patterns which emerged speak to the composition of the painting or in my case, mural. But still, even from her, I noticed an occasional remark, albeit the tiniest aside, hints of a kind of professional jealousy. That man was always in the conversation!

I was curious what I should think as a boy. Shouldn't so many people who agreed so vehemently be right? But I will tell you, it always struck me as envy. The most articulate, rational, reasoned critique always seemed tinged. Any kind of dispute at all just made him all the more the undisputed king of the art world. And people just hated that!

My mother had a good friend who was the mistress of another prominent painter in Paris, and I swear I think the family pass-time, she had children from a previous marriage, was chanting hate for the man. I also swear that I know mature, major league art world players that when they see his work their heads snap to the side as though he wasn't there! They just hold their breath hard until they get past. That is how much pain his celebrity caused and still causes. Alliances of pain. This Mozart made a Salieri of not only every painter alive but even, maybe even especially, their loyal friends and family! All reason, all grace, all sanity just went straight out the window! This brash man just had this effect on people! He might as well have been American!

So as I enjoy the work of some or other painter, contemplate them in all their glory, I can forget for a moment; I sense the shadow is lifting and that they can breathe a little, that they can pretend for a moment, like every artist does, that they are the world's greatest painter, and sigh, and smile. A moment's peace from that man who never allowed any artist much more. Maybe the world will bury him for a few hundred years, forget him, forget his greatness, forget his influence, forget that he was at once the absolute painter's painter and painter's nightmare. That every brush stroke made belonged to him! Was his! That he was the Father of 20th Century art and that we are all his descendants. Like it or not. Maybe. Maybe we'll forget. But I don't think so.

- Posted using BlogPress from my iPad
Posted by Addison Parks at 9:23 AM 2 comments:

Push and Push Back! 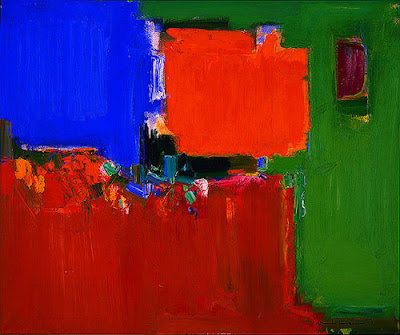 I have objected at times to the idea of push/pushing and didn't exactly know why. The push I refer to is the one people do with themselves or others to get them over a hurdle or fear or hump. I remember the moment that I first consciously objected to the idea was when a teacher of mine suggested I push my work as a painter. It felt wrong. I remember that it occurred to me at the time that pushing my work would just make it pushy, and I didn't want that.

I also learned one thing later as a teacher, and still later as a parent; that force creates resistance, that pushing makes for pushing back. We've all felt it from early on, when someone pushes us all we want to do is push back.

There are lots of reasons why pushing is not a good idea and usually produces the opposite of what we hope for. I always use the horse to water proverb because it helps make the point that nothing gets accomplished by pushing. The horse drinks when it wants to and that that is not only as it should be, but what is good and right. The horse is free to drink when it is ready to drink and this brings us to the real truth in all of this, to the magic word: freedom. Freedom is what is being safeguarded through resistance. Freedom is our greatest treasure! It is worth pushing back for!

So is there anything we can do instead of pushing? When we push we not only make it about us, we prove it is about us(listen up Tiger Moms)! When we make it about the person we wanted to push instead of ourselves, the difference is automatic; we acknowledge their control, not ours, and all that is left is to encourage. Encouraging might seems like a fine line, but it makes all the difference. Encouragement gives strength and confidence to that person whose freedom we wish to preserve. Encourage is the difference between teaching to fish and providing fish, between helping someone or doing if for them. The courage belongs to them! Encourage is our responsibility as parents, teachers, mentors!

So what about when we are pushing ourselves you may ask? No problem, because when we make things about us, we are really talking about ego. When we push ourselves it is our ego that is trying to push us around. It is merely a question of disarming the ego by showing it that is is in everyone's best interest to let the horse drink when it wants to drink!

It is worth adding that this is why it is impossible to teach art. You take away an artist's freedom and they have nothing. However You can encourage art, as we all know, and that makes the difference. In fact, we can even encourage ourselves!

All of this explains why almost no one who was pushed to play the piano ever ends up playing one, and what a shame!
Posted by Addison Parks at 7:05 AM No comments: