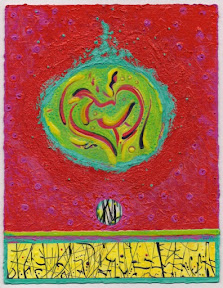 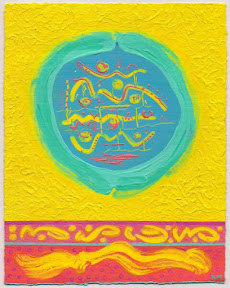 I am happy to have two paintings at the Saratoga Arts Center. It is very special for me to be invited because when I lived in Saratoga for 5 years, the building that is now the Arts Center was the town library, not far from where I lived and I enjoyed spending time there. The show was curated by the then Director, Elizabeth Dubben, before she left for a new position. It is always a pleasure to show with artists I admire and look forward to seeing their work in the show!

Please stop in if you are close by.

Topkapi Medallion # 1 & 2, acrylic on paper
Both paintings, shown for the first time, were done at the EMILY HARVEY FOUNDATION in Venice, 2014, after first spending several days in Istanbul and visiting the Topkapi Palace, the Blue Mosque, Hagia Sophia and the Modern Museum showing contemporary Turkish painters. The Asemic writing, often a form used in visual poetry was inspired by Islamic Script I saw set in Mosaics tiles. I learned that Turquoise, a predominant color in mosaics comes from the blue of the Turks - Turquoise.

So generous and kind of you to post the show on Artdealmagazine blog! It looks quite impressive, if I say so myself. I am
deeply appreciative.

Two group shows in Chelsea (membership show and a juried show) with three paintings, other group shows coming up
including one in Sacramento. Will be giving a pecha kucha presentation on newest series, Triangles / Tondos / Triptychs at
Opalka Gallery, Sage College of Albany in Nov. The latest triangles that I worked on during a residency in Croatia in April of
last year morphed into collages that suggested kites. So I am now working on Kites. They are on heavy paper, unframed
and are to be shown affixed to the wall with velcro. There are about 15 kites and 30+ of the other tondos and triptychs.

Hope all is going well with you. 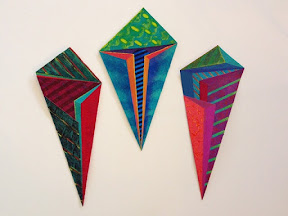 Posted by Addison Parks at 3:23 PM