Being There: Martin Mugar's Fire 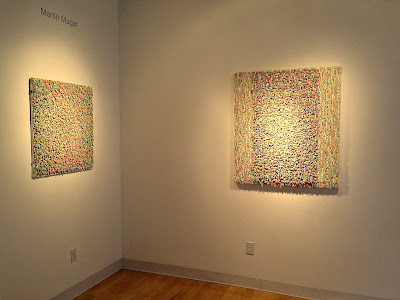 In the cold wintery gray of Boston, even as we approached the Bromfield Gallery on Harrison Ave, me and my friend, the painter Larry Deyab, were off to see Martin Mugar's new show, and we caught the bright warm glow of it from the outside and from way off. It was unmistakable. Like some mystical experience calling us. Some beacon of hope. It radiated this choir-of-angels light like some magic cave in the side of a stone mountain. Martin Mugar's work is like that. Elvish stuff. Again, magic.

As we got closer we could see him through the large windows, standing in the middle of his fire, in the flame of it, waiting for us at the center of the gallery, surrounded by his work. The wizard Martin Mugar. I've always said this about his work. That the energy, the light in it, combusts like some cold fusion machine, the particles circling around inside it until it reaches that critical mass and explodes. But some things have changed in the new work, and these changes have moved the experience along in a way that amplifies what we have come to expect from him. 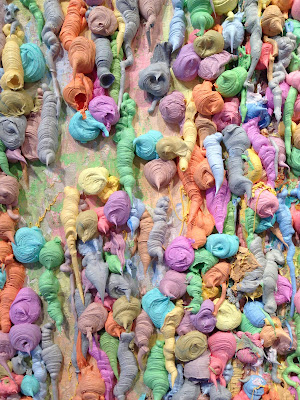 Make no mistake, as physical as the work is, like sculpture almost, these paintings are a highly aesthetic, even spiritual epiphany from the word go. They are not, as they have sometimes been described in the media, a candy-coated, Willy Wonka pleasure ride, although the pleasure is there for sure, and physically they resemble taffy and chewing gum. That is their worldly form. It might be difficult to get beyond that for some, but when you get still with them, look at them, see them, listen to them, hear them, let them work their magic, well then, you get carried off into space, catapulted into the stars, like some hyperdrive, and will find yourself floating in some consciousness that is another world. The world of Martin Mugar. A rare world. A world like no other. 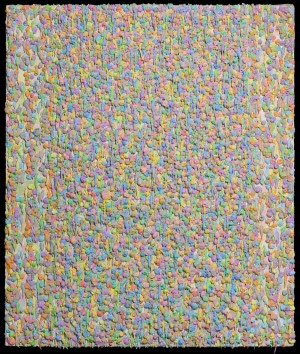 And that is it. That is the true meaning of originality. The work takes you to a place that you have never been before. To a world with as much attention to detail and experience as our own. Some might accuse the work of being obsessive, as though he was gilding some lily. But his devotion to the work is the necessary attention paid to creating something complete, evolved, seen through in a way that doesn't just drop the viewer off on another planet, but makes sure that that aesthetic experience is sound and true. This is a vision. A generous vision. A loving vision. A lofty and masterful vision of great beauty and poetry and intelligence and feeling.

The abstract nature of the work allows for that lofty vision. It is not candy land. It is that ultimate place of enlightenment and light. It is the climb to the top of the mountain. Each painting is a step. The thick waxy pastel paint couples together, compounds, like drops of water coming together to form a tsunami, diffusing, to flood the painting and the viewer in a symphony of music and light, to lift the viewer up like an El Greco into the ether, onto some higher plane, into the heavens.

Standing there with Martin, surrounded by his paintings, was like standing in the flame. Another friend, the rare books dealer John Wronoski, joined us. We basked in the work. We stood and talked and it was as though we were in some ethereal turkish bath of fire. Healing while it danced around us. And Martin was happy. And why wouldn't he be? Everything he worked for was working,  for all of us, beautifully, like Swiss clock-work. All of that hard work. All of that hard seeing and sensitivity to the tint and temperature and hue and chroma and movement and juxtaposition and direction and correspondence of color, mark, texture and composition. It all came together. It all meant something. It all had a purpose, and we were all lucky enough to be there.

Posted by Addison Parks at 1:32 PM

What is it about Martin's work? If I were to stick my neck way out, what would I say? Because I don't respond to it the way I respond to painting per se. If I force myself to ask "what is it" then, if I confront myself about what is really going on, then I think that I still come back to the same place.
I think of these paintings more like machines. They are motors that purr with Martin's joy of making them. They are his "all right with the world" machines. I appreciate that. I really appreciate that. I like the experience of that.
For all of their objectness, they are machines. I don't like them so much for what they are as what they do. Like cars. I'm not one of these people that like cars for what they are. I like them for what they do.
This is the paradox that gives this work some of its kick. It seems object-like, it seems decorative, but it is really not at all, it is really something else. Like a machine or motor or organism. More than a sign that points to something else, the work is like some generator, some solar panel, some music box that what it makes is something you can't see so much as feel or experience. They are elaborate in that regard. Like the fireworks at the 4th of July. They are an experience, an event, staged at great lengths for our benefit. What they are is what they do. Good will fireworks. Yes, like Willy Wonka's chocolate factory they really make happiness. They are Martin Mugar's happiness machines, and I, for one, am truly grateful for them.

It is worth adding that one of the reasons I don't look at Martin's work as painting per se is that Martin is busy changing the way we look at painting. And he is doing that with paint. Felt paint. This is deceptively radical stuff. There are a lot of artists who have obviously tried to change the way we look at art, but they did it by abandoning painting. Martin Mugar has gone, even burst, through the wall that so many painters hit, painters who either crashed and burned or turned back. That no one can see these paintings as paintings is a testament to how far out over the edge he has gone. My own response is one of following the work out past that edge, and leaving the painting behind. I can only see the bigger picture. Which is why I haven't talked about the more physical application of thick encaustic paint that attains a somewhat pastel appearance through the thoughtful and felt process of articulating an essentially diffused abstract imagelessness.

I am always happy to have you inquire into the work trying to understand what it is about.In many ways the work is a mystery to me.I am probably not aware of all that goes into it.

What you said made me think of how I really want these paintings to act on the viewer.I am doing them for myself but at some level for good or bad I still want them to be like a great Rembrandt of Titian.sometihng complete.There is so much thinking and waiting going.However, It made me think of two comments on the work that always haunted me.One by McKee in Ny who said they were well crafted.Is that good or bad?the other was from a curator at the danforth when I left something off for one of those shows they sponsor in the early summer.I cant remember the words exactly but she seemed disturbed by the lack of gesture.I don't smear the paint or move it around.I make those strokes from some deep sense of breath or meditation,beyond the hand. a slow sort of waiting and marking of time.And a belief that they will all add up.Maybe there is too much being held back,too much patience, that I should express something.I said that about your work:that something happens in them but you don't try to express anything .You create an event for the viewer.But as you said about Snyder and Fishman you are not trying to create a cure for cancer.

It is probably the abstract imagelessness that escapes everyone.It is something that I think about. I remember thinking that even flat abstract patterns a la Hofmann was an image.
My spell check tells me that imagelessness is not a word. Good for you, you have coined a new word.
Martin

It is of course completely appropriate that you should express a certain mystery regarding your own work. Leon Polk Smith said that that was why he kept his work around, because he had so much to learn from it. That you are compelled to do it is as it should be, as how could it be any other way? You are not illustrating some idea. Absurd to reduce that to making the work compulsive, as though Michelangelo's ceiling was compulsive. Some may find the work daunting, even intimidating, and react defensively as your creative drive might leave them feeling wanting, even sluggish. I can only suppose Chillida had this affect on EVERYONE. Richard Tuttle went so far as to suggest that his work was pursuing him, not the other way around. Your mystery says as much.