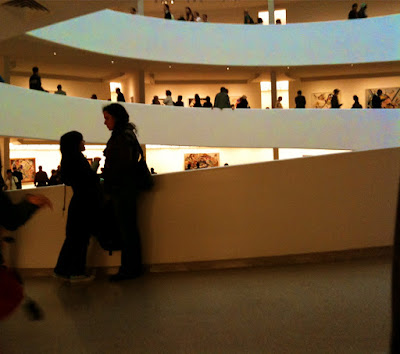 Perception is a funny thing. Most of the time we would rather not think about it. Disturbing. Demanding. Destabilizing. One good way to recognize how it changes, and that it does change, is to think about age; if you're 10 years old then 30 seems incredibly old, and then when you're 50, it seems even more incredibly young. Our perceptions change so fast and all the time, and most of the time we don't have a clue.

Take the Kandinsky show at the Guggenhiem. It could be too much. Hard to believe, but it could be. You have a hard time taking it in. Too many people, too many paintings. Nevermind that you're on a bias, slanting up or down, going up or down hill. The problem of looking at painting in the Guggenhiem is legend. The best thing about it is the worst; you can see a lot of paintings at once. You can't take them in in that one at a time way some museums offer, each painting a private viewing experience up close and personal, bread crumbs on the way to a greater understanding of art or artist.
Instead what we really get is like peering from the rim of the Grand Canyon, and then slogging down the designated path. It is totally linear, no bouncing around from gallery to gallery, but instead a gauntlet of art, at arms length, like standing in so many little swimming pools, leaning, one leg shorter than the other, weight always on your right leg, the way that they say that the leg you favor will lead you in circles in the desert. Circles and circles of art. Circles and circles of Kandinsky. Dizzying. And that is what I was left with, more than experiencing any one painting, it was the cumulative experience. It was seeing a coil of them from across the way, exponentially, the trail of abstraction spiraling through space, a strand of colors and shapes and marks from the balcony of the opposite side, taking it in the way an emperor must have gazed upon his empire, a presidium, a sum, an expanse. Expanding Kandinsky.

That is Frank Lloyd Wright's gift. An altered perception; seeing painting a way you're never seen it before, for better and for worse. 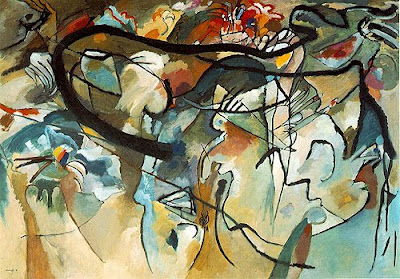 What did I get out of the actual work this time? In particular? It was how often Kandinsky used black to nail a painting down, to complete it, to resolve it, to bring it to fruition. The opposite kind of metamorphosis of the butterfly in one sense, but in the end the results are the same: they fly! Abstract color and shape float across the picture plane as free as the wind, like colored clouds and leaves floating softly down a summer's breeze; and then black is applied like a kind of clamp to hold it all in place. Quite remarkable. If not a little disappointing.
What else? Around 1923 Kandinsky used a compass to make his circles. There are holes in their centers. Surprising. Apparently he abandoned the practice shortly thereafter.

And just a reminder: he started his career as a lawyer. He was also Russian, spent half his life in Germany, moving to France to escape the Nazis in 1933, enjoying his last five years as a French citizen. How his perceptions must have changed. Communism, the Nazis, Paris, and the rise of a New York art world. Blue Rider to Bauhaus, brioches and Broadway.

Even though the endless parade of paintings exercised a gravitational pull down the long and winding rows that was something like a slow motion drive by shooting of canvas and paint, again it was the view of Kandinsky that will stay with me: the windows of color and light across the way, not just the spiritual in art, but what I imagine is the powerful Russian folk spirit that was the heart and soul of so many artists that emerged from that part of the world at that time.

They all shared that sweetness with the rest of us, and in that way that sharing is showing, showed us another way to live, to perceive life, to celebrate life. They brought their culture through art, through painting and literature and music, and enriched our lives. Kandinsky abstracted that for us. Literally. He was just painting maps. Directions to a beautiful place he once knew.