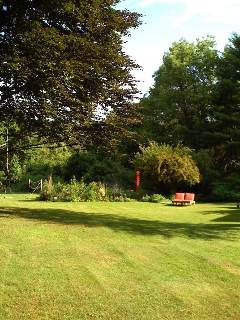 If you don’t think the grass on the other side of the fence looks greener, then chances are people probably think you’re smug. So it goes. But the whole point is that the grass just looks greener; it isn’t really greener! Some people spend their whole lives looking for the greener grass and never figure this out.

At the risk of beating a dead horse, I’ll reference my one brief mentorship with Richard Tuttle yet again, to make my point. Richard Tuttle said one thing to me at the opening of my show at PS1 in 1980(and yes, by this time our relationship was already in decline after just a few years). I had two large murals in oils in a project space. I was hiding out in the basement listening to a Giants game with the janitor. I ran into Tuttle on the stairs. With a giddy smirk he dismissed my show, saying it was like a really nice truck sitting in the back yard; in other words, all dressed up and nowhere to go. I mention this for two reasons.

Yes, I was one of those people; my grass was plenty green, thank you very much. All dressed up and nowhere to go is just a negative spin on the fact that he was always looking for the action, while as far as I was concerned my grass was green enough for me. I was happy to get dressed up and just be. Maybe dressed up was just how I looked to him. It is a way of saying that there is no there there, of course, but who decides? One person’s frontier is another person’s back yard, and I learned that young. The “action” always made me want to take a shower. All those people caught up in the grass on the other side of the fence made me uncomfortable, mostly for them.

My oldest is doing graduate work. His teacher is a well-known contemporary art historian. He is in the same position as a Richard Tuttle, or that I was at one time as a New York art writer and teacher at RISD. Decider! People look to you for judgment. Judgments. It is a corrupting force. It is why I quit writing art criticism and why I quit teaching. I refused to go there. I was reminded of the whole thing with Tuttle because my son told me that this teacher just saw his new paintings and that the first thing my son was aware of was: would his work be dismissed, in this case with a sound his teacher makes with his lips. Apparently that didn’t happen. Instead he got something more positive, more along the lines of pleasant surprise, which was nice for him.

The thing I tried to give my students, as well as the artists I wrote about, was that other sense; that sense that their grass was green enough, if not really green. Of couse the whole system collapses if we are not driven by the doubt, the need, the greed, the lust for greener pastures. And of course, we will be reviled for being smug.
Posted by Addison Parks at 12:45 PM