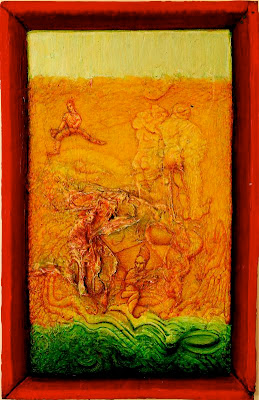 I know a lot of artists who face this dilemma. I'm not saying I'm one of them, and I'm not saying I'm not. It's kind of a damned if you do, damned if you don't sort of thing. We have too many of these paper/plastic, lose/lose scenarios in our lives. Bad options, or really no options. Artists are faced with the choice of following a dream that is going to break their heart, or breaking their heart by not following their dream. Again, paper/plastic.

Because no matter what you think of someone's work, or what they tell you about it, what they hang out there is their heart. It may look like a lump of coal, but it is their heart. At one time I made a living writing about art in New York City, the big art dormitory, in the late Seventies/early Eighties, and the only reason I was a success, and I was, was not because I could write, because I couldn't, but because what I wrote about was just that: the heart that they hung out there. Maybe it was masked in rhetoric, wrapped in armor, buried in code, but it was their heart, and I could see it and write about it. I made seasoned, tough-minded artists CRY! You could see that, feel that, they would ask. How? It made what they were doing a success.

The other thing would happen too, and it did. Some artists felt exposed, and as a result, angry. They didn't want anyone to know that their heart was there, and that they could therefore get it broken.

Because that is what happens. You hang your heart out there and it is going to get broken. Sooner or later. Just happens that way. Goes with the territory. Comes with the job. Sure, some artists think that by trying to hide it or guard it they can protect it. Maybe for a while. But some night they are going to wake up and feel it breaking. And then what are they going to do?

What does everybody think has been happening all these years with all these artists who hang themselves or drive their car into a tree. Sure, I came from the other school of thought, that art was the thing that saved them, but in the end, yes, twas beauty that killed the beast!

As Charles Giuliano, the former Boston art critic, said in print somewhere, or maybe in an interview with me, I can't remember, the worst thing that can happen to an artist is to be ignored. I thought the worst thing was not to be an artist. Paper/Plastic.

The reason I bring all this up is because I am dumbfounded by the striking resemblance the life of the artist bears to the mental disorder they call bipolar. What we have here is the artist as yo-yo lurching between the giddy heights of glorious grandiosity and the loathsome self-pity of a bottomless depression. There isn't an in-between. No artist sets their sights on anything less than world fame. Picasso is the bar. Nothing less. It is like the kid shooting free throws pretending that there are two seconds left and the championship rides on his shot. BUT, we're talking about grown-ups. There should be an in-between. Not paper/plastic.

I spoke to two artists last week, and got a message from a third. We're all in the same boat. We all want to keep afloat, keeping our dream of the artist in us alive. But we need something no one can give us. We need a ringing world class endorsement of our greatness. Again, nothing less will do. Aspiring to anything else is what is called embracing mediocrity. Oooouu! There is no such thing, of course, as proof of being a great artist, which is why even seemingly successful artists perish by their own hand. Gregory Gillespie did it at this time a few years ago. It is probably in his honor that I write this; it is certainly because of him that at this time every year since, what he did is on my mind. There is something wrong with the art world that this happens. There needs to be a voice, somewhere, but we don't hear it in the academy or the media, quite the contrary. The message we do hear instead is all or nothing.

Recently I was berated by some art curator for my lack of ambition. He started to quote something about small ambitions when I reminded him that I had said I had NO ambitions, and then he got it.

“Most people would succeed in small things if they were not troubled with great ambitions." Henry Wadsworth Longfellow

“I'd rather have roses on my table than diamonds around my neck.” Emma Goldman

While I was sitting outside thinking about these things a Great Blue Heron flew over head with its giant wing span like a prehistoric beast, like a god, really. It was a humbling experience, and at the same time inspiring. Made me ashamed that I could ever get caught up in stupid stuff. I like to tell the story of how when my oldest was little and we were looking for interesting rocks on a hike one day, he reminded me that when you're looking for just one rock you miss out on all of the others.

Seems to me as artists we could all breathe a little easier if at the very least we could tell ourselves and somehow believe it that Picasso is not the bar; that the bar is sharing what is in that "small thing" that beats in our chest, that we can only hold it out in front of us, cupped in our hands, like a bird. That if we can share that sweetness, with perhaps only those closest to us, we have made the world a better place, and only good can come from that.
Posted by Addison Parks at 12:07 PM