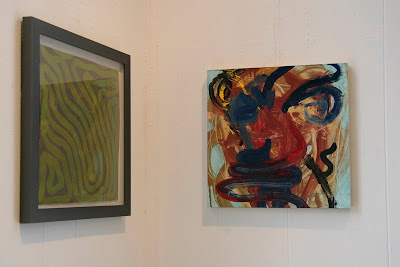 ArtDeal is not called ArtCharade for a reason, although maybe it should be. The charade is out there for all of us to see and be a part of all the time--the deal is something else. The charade calls to us, and we are alone facing it. Everyone else is urging us on, saying come on in, the water is fine. The bigger the better. If we are concerned about getting swallowed up by the charade, big or small, the one or many, we are pretty much on our own.

There are the individual ones, and the collective. Ones we do to prove something to ourselves, and ones we do to prove something to everyone else. Sometimes we aim high or low, raising or lowering the stakes, raising or lowering the bar; or we target particular groups: maybe our peers, maybe our family, maybe our colleagues, maybe our community, maybe THE WORLD!. I live in suburban Boston(It is rural in feel and abutts Walden Pond, so there is that charade). Suburbia is famous for its unrelenting, muscle-flexing, to-the-death parade of charades, one on top of another like some giant ice cream sundae.

The art world is also pretty grand when it comes to these same kinds of human performances, these same kinds of HYPE; they come in all forms, some more convincing than others, and sometimes it seems that being more convincing is all that matters(more charade to the charade!). What are we to do with them all? Do we give our best performance? Do we strip ourselves naked? My first thought is that whatever we do, the thing that we don't want to do is to believe the charade to be true. If we could dismantle all charades that would be great, but it is not going to happen. I suspect the answer is, as in all things, awareness. As long as we don't buy into the hype, our own or anyone else's, then maybe, just maybe, we stand a chance.

I remember as a boy getting very nervous when people started putting me on a pedestal. I immediately wanted to get down. Often I would behave destructively in order to be removed. I had seen how far others had fallen, and I didn't want to be knocked off when I least expected it. I thought it better to get down by myself. I'm still not sure why.

I read today that the conceptual artist Sol LeWitt died. I was saddened by the news. I've always had a soft spot for him, for his works. I have some. About fifteen years ago I even "drew" some of his wall drawings, at the Addison Gallery no less(all the installations are done by assistants--he doesn't actually physically make them), so that I could write a feature about him for the Christian Science Monitor--see Artdeal Magazine: Features. In that article I raised questions about his role in the careerism(charade!) that obsesses the art world. I regretted that attack today. Apparently he was a very private, shy, and humble person. I didn't know that. I regretted that anything I said might have caused him or anyone close to him pain.

So I asked myself why I had written what I wrote. Why I had found it necessary to end this grand feature I had invested so much time in with a knife to the gut. And then I remembered.

About thirty something years ago LeWitt had come to speak to my school. The way I remember it, that is, the impression he made, was entirely careerist. I was young and hungry for talk of the mysteries of ART, and all he did was boast about how many shows he had had around the world, including Japan, in just one year. I believe the number was 105 or 6. Nothing else. No insight, no chunks of wisdom, no art lore. Just what a successful guy he was. All I saw at that moment was a showman, and I never quite forgave him until today. At that moment I was shocked and dumbfounded and disillusioned, and as a result I never really felt the same way about him again after that. When I read the sweet send-off the Times gave him this morning I asked myself if this could even be the same person. How did I get it so wrong? He didn't even look like the same guy I saw over thirty years ago(and of course neither do I).

Just a few years later, I'm not sure how many, I saw the painter Alex Katz speak and I had a similar reaction. All he did was talk career. Sounded like a merchant--the Music Man--right here in River City. I left the auditorium reeling and that was when I bumped into Richard Tuttle, and went on that bumby ride. He was up to something else, Tuttle was, and I wanted what he was selling. A different type of hype.

Now I don't know if life is a cabaret old chum, but it seems to me that we all have our own charades, and we need not rain on one another's. Tuttle liked to live like a hillbilly in New York. For whatever reason I found that charming. Who knows what kind of issues I was compensating for or surrendering to. Did I think careerism and commercialism were bad where art was concerned? Evidently. Do I still feel that way? I'd say the chances are that I'm worse than ever.

The art world has endless charade possibilities. Commercial, academic, idealistic, and eccentric. Made of bricks, sticks, or straw. More ego, libido, or id. Just step on board. There are guises and masks to suit every shape and size, and every appetite or inclination. One can be a rebel, a maverick, a troublemaker, a malcontent; a visionary, an artiste, an inventor, a philosopher; a charlatan, a hedonist, a sexist, a wiseman, a fool; a purist, a witness, a reformer, a problem solver, a realist, a voyeur; a seducer, a victim, a misunderstood, a truth-seeker, a truth-sayer, a nay-sayer; a liar, a magician, a creator, a destroyer; a classicist, a romanticist, a hero, a saint; a feeler, a healer, a warrior, a peacemaker; a thinker, a perfectionist, a craftsman, a shaman; a god, a demon, a comedian, a whiner; a pessimist, an optimist, an expressionist, an exhibitionist, an explorer; a poet, a dreamer, a naturalist, a spiritualist, a teacher; a uniter, a divider, an entertainer, a communicator, a genius, a catalyst. One and all! All and one! Pick your poison. I can only speak for myself; I know I'm in there.

I just have to keep my eyes open.
Posted by Addison Parks at 5:47 PM

What a splendid blog. I've been looking for you because I remember reading One Hundred Ways to Survive as an Artist about five years ago, and it stayed in my mind. Just a thought about the broken heart of the artist...perhaps our connection to the creative spirit is just what we need to put it back togther seamlessly.