If ever there was a painter whose work is shrouded in mystery, it would be Milton Resnick. He is both difficult and challenging; and the two are not the same.

This was his nature, his experience, and his legacy. Ironically,  he is considered by many to be the painter's painter, and his followers are legion.


The truth is, however, that "painter's painter" doesn't even begin to tell the story, which is why the use of the word irony. The power Resnick holds over painting and painters is not so easy, not so genteel. No, God, or the Father, would be more fitting, as so many painters who have come to his table and made a meal of his painting, have become one of his sons and daughters. It just happens. Almost like it or not. It is a truth that is complicated, and difficult, in that God and Father way, and "painter's painter" falls so short that the expression seems almost pitiful. In the same way that reproductions of the work fall short, the way a photograph of the Grand Canyon falls ridiculously short. Resnick engenders that kind of awe. That kind of magnitude. Almost terrifying.

No matter how we may comfort ourselves into thinking that we are prepared, experienced, adept, sophisticated, educated, and aesthetically tough-minded enough, when confronted with Milton Resnick's work, we are in the dark. We are back at the beginning. Every time. It is the beauty of his work. It is always changing. It is always different. It always gives us something new. Every time. In this regard almost more than any other Resnick stands alone. It is the double-edged sword. Because it is always surprising us, and never fixed, it keeps us at a disadvantage. It does not allow us to become comfortable or familiar. Ultimately, it eludes us, and remains unknown, and unknowable.

At times, especially from the 70's on (after he abandoned what he dismissed as his pretty paintings-- the "Monet" work of the late 50s and very early 60s), the work becomes absolutely opaque. In fact, if one is to believe his mission, not only did he no longer let the viewer in, but he came out to meet the viewer, almost as if in battle, as in a preemptive strike.

By brilliantly asserting the action of his paintings out in front of the picture plane (the final frontier after painting had been so thoroughly explored in terms of depth and then flatness), Resnick pioneered and then painted himself out of the picture. It was an unhappy result, and not one that he could likely have forseen or thought through. Nonetheless it suited him. This was his difficult side. Hard to get. He went where few could follow.


All the intelligence and touch and passion and poetry and longing inside of him that found its way into his paint could not overcome what could easily be percieved as his ill advised assault on the viewer. By advancing outwardly he risked pushing the viewer away, greeting them but at the same time pressing and almost suffocating them with his seemingly impenetrable fabric of paint.


Indeed, fabric was what Resnick gave us. The fabric of a life he suffered through in so many ways, as a Russian immigrant boy growing up in Brooklyn, as a young artist during the depression,* serving in WWII,  three years starving in Paris, coming into his own as a first generation Abstract Expressionist through the 50s in New York, and then watching everything go Pop in the 60s. He painted the fabric of life he saw in the universe. Someplace more like the firmament. He painted an all at once ragged but sublime fabric that was his sprawling and unfathomable vision of life.


For the viewer to move through his densely textured web, his woven and crusty wall of paint, to pass through his thick fabric, to get past the tower of rage and obsession, to dissolve into his night time sky, or dive into his quicksand, to discover the warm glow of intimacy up close, the flecks of jewel-like paint shining inside, embedded in his ferocious sea, the fire below; to find his heart, and even his joy and humor, required more than loving him or loving his painting, required more than a brave and fierce commitment to his pure, demanding, and seemingly limitless abstraction, it took the broken and bleeding feet of a believer. It took undying faith!** Or...maybe...just maybe, it took what all art takes. Unfettered curiosity. Untutored wonder. An open mind. A big yes. ***

Resnick painted himself. He painted us. All of us. The vast thing from the bottom of our souls to infinity. Nothing less would do. When we go there, we go alone, or just maybe, we go with God (His studio on the Lower East Side was a former synagogue). With so many painters we have some kind of footing. With Resnick we have none. Hardly a color we can hold onto. We grasp. We cling. We brace ourselves against the elements. We reach for straws. We let go. We get knocked down. We fall. We get back up, and we do it all over again! 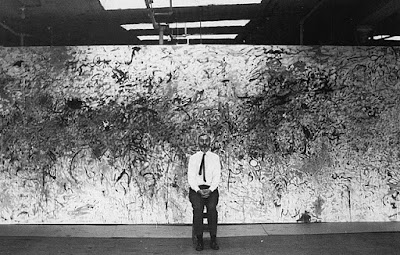 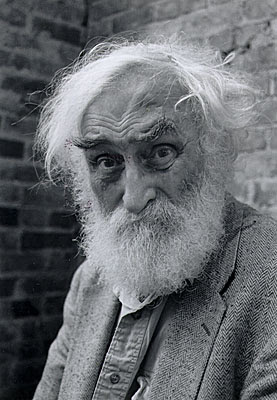 ** It is worth noting that before Milton Resnick ended his life in 2004, his late paintings tell the story of someone who retreated rather considerably from the severity he demanded of himself and of painting most of his hard-fought career. They reflect a gentler and more forgiving view of art and life; perhaps more than just a stepping back from the abyss, perhaps an entirely different feeling about things altogether. There is another story there that it would seem needs telling. 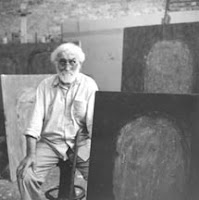 *Landscape by then 22 year old Milton Resnick working for the Easel and Mural Division of the WPA.

*** I grew up with this painting, Pennant, from the age of six, and it has been with me everyday since, and now hangs over my mantel. Son of Resnick.

Wonderful Resnick writing. Harvey Quaytman once told me he only liked to
read what painters write about painting. I felt that in your words. Plus
great photos and reproductions.

It reminded me of a friend who loved Milton's work. He owned a few paintings
but bought a small crusty dark one from the 70's, which he had shipped to
his home from NY. His 10 year old daughter was there when he excitedly
unpacked the painting - and when he pulled it out she looked at it and said:
"Daddy, where's the painting?" John

I like your struggle to understand Milton's struggle. No easy answers, which is as it should be. Nina