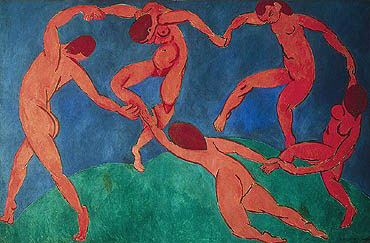 Which also explains why Matisse is so beloved, or E B White, or the Beatles. Each of them touched the innocence in those who feel it inside themselves. It is something we preserve. It is something we keep. And some of us, when we know we've lost it, do everything we can to get it back. We spend time with children, animals, we garden, we dream, we make art. Yes, maybe I'm dreaming, but I don't think so.
Posted by Addison Parks at 12:40 PM No comments:

THE WHATNESS OF DRAWING

Click To Play
This is a video companion to the previous post about the role curiosity plays in life in general, and in drawing and art in particular; in this case involving the process of tackling a drawing installation whose nature is essentially abstract: at Bow Street Gallery in Harvard Square.
Posted by Addison Parks at 4:20 PM No comments:

What's Next: How Curiosity Keeps us Guessing AND Going! 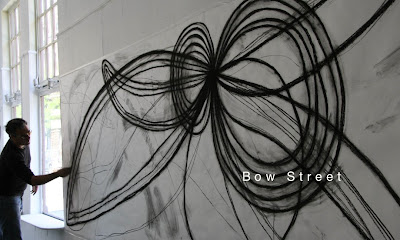 In the last couple of days I've been discussing something with writers and artists that brings up an old theme, one that circles around again and again in our lives from the first moment we can breathe to the last: curiosity. I hit on it the other night when I was talking about something that keeps me writing, inotherwords, keeps me working at writing a particular thing when otherwise I might give it up, to a person who understood that it was the same thing that kept him READING when otherwise he might stop. Curiosity.

I tried to point out, not successfully I might add, that I write like I read: that I want to know what happens next; that I write with as little knowledge or plan of what will happen next JUST SO I DON'T KNOW, so that I can find out through the writing while I'm writing, and that that will keep me going. Again, the CURIOSITY. I was pointing out how important it was that I was my own "avid" reader! That I want to know, that I'm curious, that the anticipation is part of the motivation, part of the pleasure, even part of the thrill!

The very next morning I was at Bow Street working on my drawing installation and an artist walked in and while explaining my whole "no plan, just draw" philosophy, it hit me like lightning that it was the same thing I was talking about the night before; that I was almost first and foremost a VIEWER; that I wanted to see what was going to happen as I was drawing and not before(Knowing full well that there is so much more that can come from my unconscious than from my conscious intellect. I've always thought that we unknowingly do what we are looking for; that the music or writing or painting we make is the thing we need from the world, the thing that is missing and we can fill in that blank, find and complete that in and for ourselves)!

Which reminds me of something else. I'm always a little sheepish because I find that I'm not always like a lot of other artists I meet. I'm a little naive in this way. "I'm an art lover." There, I said it. So many artists aren't to my surprise( I remember Richard Tuttle being very dismissive of this, this art love thing. He thought it was wrong. Misguided. Even kind of pathetic. I remember where I was standing when he said it. I knew I was guilty. I knew he knew I was, and that was why he was telling me. He was very protestant. Art was work; all she wrote.).

Frankly, I don't get it. I find it a little sad, myself, in a confused and non-judgmental sort of way. It happened just the other day when I thought for sure this other artist shared my "art lover" passion. He was noticeably not there. It was like a hot potato. There was an awkward silence. It was like I was a kid all of a sudden. Men, real men, real artists, aren't art lovers. They aren't "fans." Real men put away there love. But if you ask me, well, maybe they did it, do it, at their own peril.

And here is where this all comes into play: when I work, I'm an art lover, and I await the things I make or do with the same anticipation I get when I go to studios, museums, or galleries to see other people's work. It's how I feel about writing. It makes me want to write. It is how I feel about everything, almost. It is why people fear movies, because they fear that young people are going to want to go out and do these things that they see in these movies. Dangerous things. Call it influence. A dirty word in art. I read Louis Menand put down the new novel by Michael Ondaatje in the New Yorker recently by making an issue of his influences. It allowed Menand to treat him like a boy to his man; a boy, by the way, whose power and INFLUENCE he will never ever, ever, EVER know. Still, the academic tried to get on top of the artist by calling him out into the street and publicly horsewhipping him with his weakness: his influences: his art love.

By way of a little post-script. So what happened? Someone asked me: "how do other artists do it(hang their work out there, their love out there, and suffer the slings and arrows or the indifference)" because they can't, they suffer too much, it is all too much.

The love was there in the beginning with every artist, I'm sure. Like a puppy. And then what? The love wasn't returned. They hung their work out there and the love didn't come back. And then what? They put the love away. They hid it away. And then they called it all something else. They made art something else. They made it "work." They made it important in some other way. To compensate. Over-compensate. When I would interview someone this was always apparent, this secret love, hidden love. First they would tell me it was all this and that, juxtaposition of this and that, and then, when I would get them to put away their armor and sword, well then, it was about some pair of pajamas they had as a kid, or the way their mother smelled. But it was understood that it was off the record. Hide the hurt. If I wrote this stuff I exposed them, and I did, and they never talked to me again.
Posted by Addison Parks at 10:46 AM 1 comment:

This is a discussion of what it means to leave one's mark as an artist.
Posted by Addison Parks at 3:14 PM No comments: