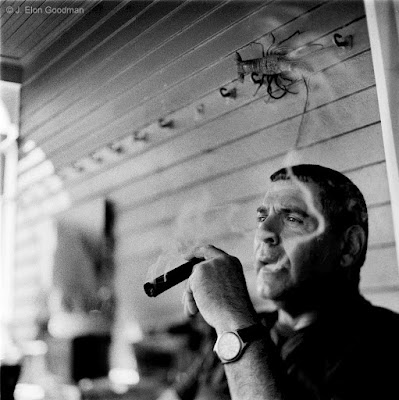 It is worth mentioning also that Larry was, for the most part, far too much the gentleman to impose those observations of his on anyone else. No, instead he reserved them for his paintings, and in this regard, he was no gentleman at all. A man who was gentle and kind in his life, became ferocious and terrifying in his art.

Larry Deyab's paintings were that reasonable combination of both him, and the crazy world he witnessed around him. They were sharp, searing, caustic, witty, ironic, comical, brutal, unapologetic, brave, shocking and beautiful. They seemlessly fused an elegant education in Boston and New York with the raw power and grit of the back city streets; like some Quentin Tarantino comic strip graffiti artist; his narratives seemed simultaneously ripped from the socio-political stratosphere and pop, ethnic, literary, fashion cultural zeitgeist, and then spilled and splashed and sprayed across his linen canvasses like a drive-by postmodern-day Toulouse Lautrec.

Religion was not spared either, although one could argue that his Christ paintings only reflect poorly on the human race. The blacks in them are bottomless. Their pain is his pain. It is beyond palpable.

Larry was incredibly knowledgeable, thoughtful and well read about everything, not just art. He smoked the best Cuban cigars and drank the finest brandy. He hated talking on the phone. He was Larry, never Lawrence. You wouldn't have batted on eyelash to hear that he once knew someone like Gertrude Stein. He got around. He exhibited more abroad, and spent time painting there, mostly in France. He was passionate and beside himself about the tragedy and devastation happening in Syria, the mythical homeland of his parents. He was patient and contemplative, with a warm and ready smile and a searching gleam in his eye. He had had his big heart broken one too many times. It had taken its toll. He carried the weight of it around with him.

His art world stories were treasures, windows to a time gone by. For example he once found himself giddy in a drinking contest with the legendary Joan Mitchell. He was also the willing and trusted confidant of the revered Milton Resnick, right up until when the great artist took his own life at age 87. Once, his artist pals hadn't believed him that he had just bumped into the one and only Bill de Kooning wandering down West Broadway with the sun in his eyes. At every art world event he enjoyed the companionship of his teacher and mentor, the painter, the rock, Bill Jensen. He spent years as Ronald Bladen's friend and assistant, building his fantastic sculptures, and only he knew their quixotic secrets. He affectionately parsed and debated with his buddy, the art critic, Robert Storr. Strangely enough, in 1982 he attended an opening for Seven Americans at the Washburn Gallery on Greene St that I was in but missed because my first son Rory was being born.

Despite all the people and friends that linked us for most of our lives(our mothers had both been friends of Resnick's, for example), we wouldn't meet for the first time until 2009 when he walked into the Bow Street Gallery in Cambridge and introduced himself. We had a lot of catching up to do. Brothers. Fast friends. He had finally come home, after roughly 30 years in the New York art world, to live in peace. Like everyone who knew him, I am so glad to have been his friend. Happy Birthday Larry. Rest in peace.