PORFIRIO DIDONNA, JOHN BAKER, AND THE SHAPE OF KNOWING


"...John Baker follows Porfirio DiDonna step for step, mark for mark, taking us on a journey of form and meaning like nothing we've ever experienced."


When John Baker talks about art he gets a light in his eyes; when he talks about the art of Porfirio DiDonna that light gets brighter. In THE SHAPE OF KNOWING, his triumphant new book about Porfirio DiDonna, the effect of his quietly considered articulation is positively holographic. To commemorate this achievement Katherine French and the Danforth Museum are generously putting on a DiDonna retrospective, PORFIRIO DIDONNA: A PAINTER'S JOURNEY(September 8th to November 3rd). The book and the exhibition are an extraordinary tribute to an extraordinary artist. The real truth, however, is significantly greater.

You could say that what Porfirio DiDonna means to John Baker is everything, that Porfirio DiDonna's touch and wisdom and love and presence and spirit are inextricably intertwined with every aspect of John Baker's life. DiDonna was not just a  dear friend and artist whose work Baker handled as a gallery director and dealer. John Baker's journey as an art lover first set sail in the glow of DiDonna's work on a visit to the OK Harris Gallery back in 1978, igniting a passion that on top of that soon inspired him to sit down and write about the work. Baker cut his teeth as an art writer on Porfirio DiDonna's work. It is by no means a stretch to say that DiDonna made a writer of John Baker, made him the great writer he is: from reviews in ARTS Magazine, to catalog essays as director of the Nielsen Gallery, to the 10 year climb that became The Shape of Knowing.

For over 30 years John Baker and his wife, Nina Nielsen, have championed DiDonna's work together as Boston art dealers. You could say his work brought them together. You could even say that it has kept them together. The depth of their affection for DiDonna has only deepened their affection for each other. It is palpable. It has been their shared passion. Their shared mission. Their glue. On so many levels.


Porfirio DiDonna was a profoundly spiritual and religious artist. There is no question that his faith has helped them shape their own faith. His vision to become their vision. His unshakable belief to become a belief that they could not shake.

Since DiDonna passed away in 1986, Baker and Nielsen have devoted themselves to bringing DiDonna's gift to the world. Throughout it all they have consistently delivered the most powerful art experience in New England from their gallery on Newbury Street in Boston, showing the work of legendary artists like Jackson Pollock, Marsden Hartley, Joan Snyder, John Walker, Milton Resnick, Forrest Bess, Alfred Jensen, Gregory Gillespie, Jake Berthot, Bill Jensen, Katherine Porter, Gregory Amenoff and so on. The list goes on. And at the center of it all all along has been Porfirio DiDonna, and The Shape of Knowing is the culmination of that dream. And this Danforth retrospective is a wonderful companion to that dream. Together they bring Porfirio DiDonna's vision and their own one step closer. John Baker and Nina Nielsen will tell you that this is still just the beginning. They want the world to know what it is missing. They want the world to know the Porfirio DiDonna they know to be one of the great artists of the 20th Century. They have bet their careers on it. They have bet their lives on it.

Of course the Danforth can only map out comparatively modestly what the book accomplishes in great detail and on a grand scale. But the results are surprising and fortune smiles on us in this show. Upon entering the museum we are wowed with a suite of the late paintings, large ones, that sweep across the space and capture our attention in a dizzying display of what can only be described as painterly pyrotechnics. Boom boom boom boom boom! On the panorama of the expansive curving back wall of the central gallery each painting like dominoes plays out the explosive climax of Porfirio DiDonna's vision for life and art and the divine. It redefines awesome. It is at once the stained glass of Notre Dame, the mosaics of Hagia Sophia, the Parthenon, the flags of the Palio di Siena, all in powerful, radiant, lucid, magnetic, rapid fire oil paint. Call them part vessel, part icon, part doorway to another world.

If The Shape of Knowing is a journey guided by the sure hand of John Baker, then so is this exhibition. Pay attention. Every view tells a story, and there are lots of them. Each body of work, each phase, each transition, unfolds once we recover from the initial tsunami that is the last works.


There are of course the early dot paintings, which were what first caught Baker's eye so long ago. These mysterious works dazzle as they draw us into a contemplative trance of math and music and the cosmos. They literally seem to add up, promising secrets that will unlock the universe.

There are also what he called "the roads," beautiful vertical arabesques that at once free and delineate space.These works evoke the garden, the country, the nurturing embrace of nature.

The outer gallery to the left and right acts as a passageway through the natural history of Porfirio DiDonna. It is a timeline of works on paper. If the central gallery is the Grand Canyon, majestic paintings viewed from a distance, this is the butterfly exhibit where the viewer gets up close, a peek inside the mind of the artist. Sketches and drawings and watercolors form an art gumshoe's paradise, providing endless hours and avenues of clues to the genius and vision of this artist. 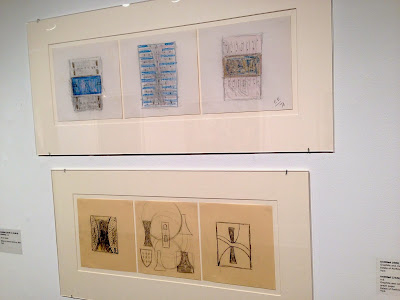 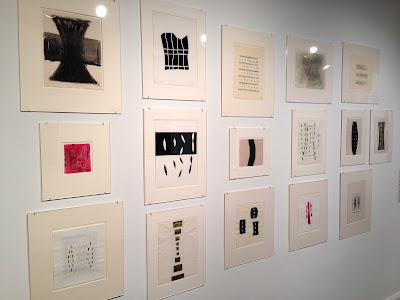 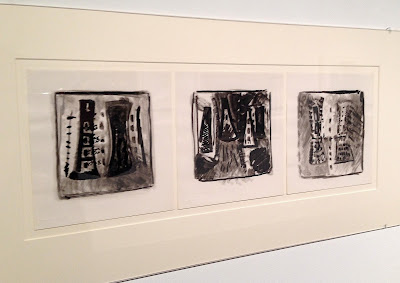 Posted by Addison Parks at 9:10 AM

Thanks Addison. We were friends of Porfirio's and remember many of these paintings. It was great to see them again.

What a great response to what is a wonderful show.

Nice to see this.

It brought back memories of the 90's when I(we) would go to Nielsen on a regular basis(walkabouts)...showing the likes of Jensen, Snyder, DiDonna et al.

I love your writing! Just skimmed this but already love what you said about John and the gleam in his eyes. Someday I hope you'll write about my work!!
my best, Joan

As always, you write with knowledge and feeling. This one is a real tribute to the artist and Nina and John; also,your writing is a gift to
us.

Thanks, Addison, for a beautiful tribute to a beautiful exhibition of DiDonna's work, and to his fiercest advocates, John and Nina.

The show is amazing and so is the book. I've been lucky enough to see much of DiDonna's work over the years and loved seeing it all brought together. The book is such a wonderful mystical road map of his journey.