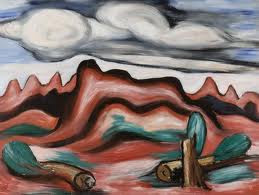 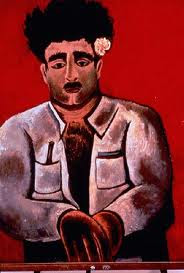 So looking at late Guston and seeing cartoons is a no-brainer. R. Crumb where are you? Looking at Marsden Hartley and seeing cartoons seems downright sacrilegious. But all you have to do is look. I was very uncomfortable luring artists into this show and then having them find out they were in something that might not be a positive connotation. I did it anyway. Nina Nielsen didn't think humor had anything to do with her work for example. Turns out Brian Washburn was comfortable with the association. Larry Deyab(Lawrence de Yab) was right there. I get the feeling everyone else, Margrit Lewzcuk, Mike Carroll, would have preferred not to have the association. Rory Parks I don't know. I've hit sort of a sour note on this one. Went too far. Trusted my gut and got busted. OK, I still think it's a great show. People, including Nina, really like the look of it. As I always say, just an excuse to hang some work.
I guess I should have just put myself in it. Jon Friedman observed that my images came from that kind of cartoon reality in a review he wrote of my work in ARTS Magazine almost thirty years ago. I wasn't so sure about it then either, especially since I had grown up in Europe without television, but on some level it was OK. My color and way of looking at form was not of this world, and humor played a very big role in that work. It was definitely more Marsden Hartley than Pearlstein. Next time I'll just speak for myself. My own sticky craw.
Posted by Addison Parks at 9:53 AM

I want to say that I love everything that is "negative or undesirable."
Zippy Deyab