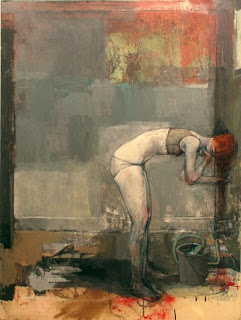 We're brought up to analyze, criticize, and complain; and we feel entitled; we feel empowered!  BUT, life comes "as is."
We think we are in control, but we aren't. What we do have control over is ourselves. That is scary, right? Because most people realize on some level, that in fact, they don't seem to have the slightest idea how to control themselves. One remembered dream tells us that. Most of us would like to control the things we can't, and turn our backs on what we can.
BUT, life comes as is! The weather, people, movies, and yes, art! Arguing with any of it is like shooting yourself in the foot: a waste of your valuable time and energy!
As an artist you have control over the time and energy you put into your work. Everything outside of that is out of your control. Pretty much everything, anyway. You can count on it. What you can control is the question; and here is the hard part. If you don't like something: don't do it, don't eat it, don't look at it, don't take it, just walk away. Just do something else. Arguing with life is a waste of time, and... it is negative!
I lot of people thought I was some kind of rebel when I was a kid. When you're a rebel, you are locked in conflict with something else. I wasn't. If something wasn't working out, or to my liking, I just did something else. I just had something better to do. For example, when I was a pre-teen, I didn't do school; I didn't like school, but I didn't sit around whining about it; I did something else instead. I didn't give school another thought. I put my energy into painting because at the age of ten I was lucky enough to have a studio the likes of which I will never have again. OK, it was on Via Margutta in Rome, giant windows, tall, beamed ceilings, and outside was the Pincio, the western edge of the gardens of the Villa Borghese. It had been at one time Raphael's studio, and all the artists called me Il Piccolo Raffaello. Ok, so I definitely had something better to do!
But as an artist we can't get caught up it the way things are supposed to be. It is a delusion we will never escape. Things are as they are. I also learned that in Italy. You do what you can do. Things are as they are. Que sera, sera. You do what you can do. Smile and wave, Boys, smile and wave!
Now have I been blindsided by this stuff? I stand here guilty as charged. I once tried to hold on to a relationship that was over, because I thought it was "supposed to be." Really thought it was supposed to be. Almost killed me. It was a hard lesson. Crazy the way we think we can want what we want. Do I have other examples? Plenty. How long have you got?
In the end all I could do was pick myself up and clean up my own house. Open some windows. Get the pizza boxes off the sofa. Clean up the shit on the floors! I had absolutely no control over anything else. If someone loves me, they love me, and if they don't; they don't. That's amore!
So if some gallery wants to show your work, they will. If they don't want to, they won't. Maybe you can win them over, maybe you can't. BUT: THEY ARE IN CHARGE! I can't tell you how many times I have seen artists try to take charge in a gallery situation. SURE AND SUDDEN DEATH! Always. It's THEIR gallery. THE GALLERY IS IN CHARGE. THE GALLERY IS IN CHARGE. THE GALLERY IS IN CHARGE. Never forget this and you will be fine.
I see people trying to take charge all the time in situations where they are not in charge, and anything but in charge. These people keep bumping their heads up against this wall and never get it. If you are not in charge, don't argue, don't pick, don't do anything but say yes; or go elsewhere. It is comical really, but a little sad.
Life is delicate. Life is complicated. Life is chemical. Forget "supposed to be." There is a show up right now a bunch of people think is important. The artist is supposed to be famous. He deserves to be famous and successful and everyone should buy his paintings. Sounds stupid, but this happens all the time. People really fall into this trap-- all the time! Smart people. Really. Maybe it will happen, and maybe it won't. Que sera, sera! Aziz, Light!
Posted by Addison Parks at 8:01 AM