ABOUT Tuttle and Jensen; Through the Looking Glass and Back Again 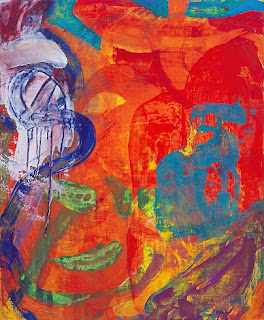 I was thinking about Bill Jensen(above:LUOHAN/PERSONA; 2005-2006; Oil on linen; 28" x 23"), and something I had written about him almost fifteen years ago for Provincetown Arts (you can find it at artdealmagazine.com). It still largely applies. Actually it applies to a lot of things, but most of all it makes me remember how I feel about painting.

And then it made me think about Richard Tuttle. I only wrote about him once, really, about thirty years ago, and it wasn't much(I first wrote about Jensen for Arts in '81). I tried, foolishly, to go there, and I haven't tried since. Tuttle is a bear. So is Jensen, but he gives you more to work with. Tuttle doesn't, by intention. I get a chuckle thinking about the people who try to write about him. Tuttle does too, I'm sure. It is such a trap.

The word "about" is appropriate. Tuttle expressed disdain for the whole notion. "About" is circling around the cave instead of going in. About is a lot of what we get in this world. After all, who wants to go into the cave? Who wants to face the bear? I've always had a bit of the fool about me. A bit of the naive. I happily rushed in where angels(????) fear to tread. I went into Tuttle's cave, a few times, I just never wrote ABOUT it. I didn't want to write ABOUT it, and if I couldn't write it, I wasn't going to write at all.

So why write ABOUT Jensen and not Tuttle? Jensen is a painter. I was just writing ABOUT myself. And so here is what I was thinking this morning. Tuttle is always referred to as something of an enigma. Why? Well, duh! Whatever it is he does, as an artist, is that which cannot otherwise be realized. It is why he seems so inarticulate when it comes to his work. If he could really talk about it, he has failed. And he is very clear about this. He was clear about it thirty years ago. 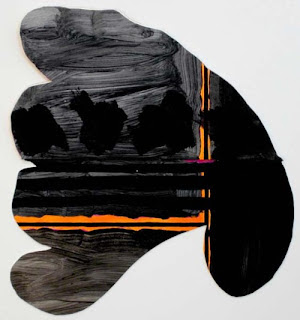 The reality is if you are circling around Tuttle's cave(above:"20 Pearls:3 Blacks", 2004; acrylic on museum board and archival foam core with brad ;19 7/8" x 18"), you don't and can't know what's going on. You could apply this to anything and everything, but it is completely true with his work. I once said about Jensen either you go or you don't go, but at least something sticks. Some redolence, some residue. With Tuttle almost nothing sticks, and that is what gets people--that's what intrigues them, because although they may never go, but they are attracted to that kind of hard to get.

The thing with Tuttle is that you can't know, at least not the way people like to know. Tuttle doesn't know, and that is the point. If he knew he wouldn't have done it. It is the wanting to know, or the appreciation that comes from everything we don't know. The wow of it--the surpise--if nothing else both of these artists paint for that, they would just be happy to be surprised. If he "knew" it, well, then it was already "been there, done that." He was always interested in what he didn't know. It was the one thing we shared. He wasn't an artist to be good at it. He was an artist to hunt. You could say art was the paddle and canoe he used to move through the water, forgive me, the water that is life, and then maybe art is just the wake. Still, if it is the wake, you couldn't separate it from the canoe and paddle, or from him for that matter.


There are people who apply the experience of abstract painting to Joyce, you know, just read it, don't try to understand it, stop asking questions, just go, and let the experience of reading him wash over you. Then what you get is IT, and when you read it again, it might be different, but that is still it. Tuttle is the same. You go in the cave. What you get is IT. No about. Just it.

There are a lot of us who just can't be sustained by that. It is not enough. For the rest of us it is everything. The language of everything. Jensen goes there with paint like a landscape painter; he brings painting to the mystery while Tuttle just is the mystery. Tuttle gives us something more like the White Rabbit's fare. A tough pill to swallow; one... makes you larger, one... makes you small, and the ones that mother gives you...

What seems strange about Tuttle isn't strange at all, but we have been so trained to think in a certain way about not just art, but everything, that it looks that way. Of course thirty years later he doesn't seem so strange. Still, Tuttle is our modern day Thoreau. He's gone his own way, lights his own way, while we've followed the highway signs like lemmings, and made all the wrong turns over and over again. Jensen gives us postcards, maps, snaps shots from that some place else, almost like a dream, so that maybe we can dream our way there. With Tuttle we can be damn sure it's not going to be that pretty. Damn sure. No. Instead, instead he gives us example.
Posted by Addison Parks at 9:11 AM