Douglas Abdell: Message in a Bottle


Douglas Abdell's sculptures have always begged this one gnawing question: What's on the inside? This question has forever been behind the great symbolic and spiritual power of his work. What's inside? It is his question, and in an almost unknowable way, he makes it our question.

Maybe Douglas Abdell never had any answers. Only questions. Or maybe he had the answers all along, but didn't think we were ready for them. Or maybe he wasn't ready for them. Who knows? It is worth noting that early on he invented a secret language to tell his story, something more Phoenician than Aramaic that probably raised more questions than it answered. He even almost dropped sculpture altogether at one point to realize his mission in paint and poetry. That is how large a role language and poetry have always played in his work. At that time he found himself more at home with the graffiti culture than working in bronze and steel.


Was he searching for his own truth, the truth, his own meaning, universal meaning, or just a place to feel at home, a place to belong, a place to express himself?


Born in 1947 in Boston of Lebanese heritage on his father's side and Italian on his mother's, Abdell graduated from Syracuse University and joined the prominent Andrew Crispo Gallery in New York in the 1970s, and then moved there just at the exciting advent of the explosive New Wave, Neo-Expressionism and postmodernism art scene of the late 70s and early 80s.

He relished the energy and dialogue as much as any artist in the thick of it all. His path was not unlike  that of the great David Smith over thirty years earlier. He transitioned from cast bronze to welding, from warmer, more organic, touchable, intimate and more traditional modern sculpture to hard-edged, geometric, prickly, and cutting monolithic vessels/figures that synthesized and charged his vision. These were both soldiers first and last.


These sculptures were sent out into the world to carry his poetry, his message, to lead his quest.

In recent years Abdell has changed. His work has evolved from poet warrior to poet ambassador.  He has opened up his closed vessel like a book. Recently almost literally. He works in stone(marble) to achieve something sublime. That is so important in all the ways we know and can imagine. Stone is hard. Hard to work and hard against time. It lasts. It is of this earth but is also spiritual in nature. It is as old as time. In it life is compacted over tens of thousands of years and longer. It is heavy not just in weight.


Douglas Abdell has found a home on the coast of Spain. Malaga. He has embraced his rich Arabian and Mediterranean cultural heritage. His recent sculptures tell this story. They have an outside that houses and shelters but opens up and reveals an inside. The focus is now on that inside, and he is eager to tell us what that inside is. He is eager to share with us what that inside means. Douglas Abdell wants us to get his message in a bottle. 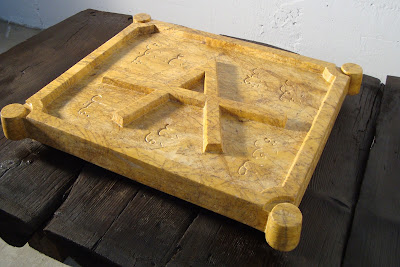 Posted by Addison Parks at 2:40 PM