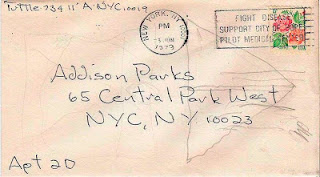 It is almost 40 years since Richard Tuttle took me under his wing and mentored me for three or four long years. The University of Richard Tuttle.

Of course he would have rounded the time since up to 40 years even though it would only be 37. That was the way he was; he would insist that I was 30 when I was barely 25. No discussion. Move right alone.

Yes. Facts were a red flag to his bull. A fly in his ointment. A barn to be burned. He admitted as much.

My question is simple: are 37 years long enough a wait to be able to reflect upon my experience with this absolutely most remarkable and confounding of individuals?

What can I say? This is an artist who cleared the decks so that he could have it his way. Doesn't every artist try to do this? Torch everything in sight so that they can start fresh?

Richard Tuttle simplified everything so that he could complicate things his way. This is him and his work in a nutshell. Get this, and you get them both, the man and the work.

This was something he worked so hard to impress upon me, that violence was inherent in everything, especially in the making of something. It was the breaking of eggs to make an omelette school of RT.

If stating the obvious makes me banal, well, that is a risk I have always been willing to take to see that what is what gets said. Nothing offends me like begrudging the truth. And the truth is that Richard Tuttle is a brilliant individual, and an utterly unique, authentic, and original artist who has always struggled for and found the courage, imagination and determination to be absolutely, even painfully, true to a vision of art and life that is nothing less than fresh. Maybe the only guy that makes such a cliche worth stomaching.

I have spent my entire 60 plus years in the art world, and have worked with and known and admired many artists, great and small, here and abroad, but I never met anyone like him before or since, nor will I ever. The world is so much better off for him, and the attention he gets makes an art world torn between marketplace and academia almost bearable. His improbable success over the years, like a modern day Savonarola, signals an ache in that world.

That was actually how I met him. October, 1977. I had been attending a lecture at Brown by a very famous and successful artist at that time, Alex Katz, that was more like listening to a rug salesman, and I had to leave before I threw up. Tuttle was standing by himself at the door to the Bell Gallery across the way from the exit.

Desperate for fresh air, I went over and talked to him, this guy in a cheap shirt whose work in the gallery was practically invisible. Small, irregular pieces of paper with some watercolor stuck to the wall, drawings with just a scrawl of pencil and wire dangling from the surface. It was the most curiously beautiful work that I had ever seen, beautiful in the true, as in truthful, sense, and his words were like Moses to me. Fresh air.

We talked for hours, stayed in touch, and later, in 1978, when he wrote and urged me to move to New York for my own sanity, I packed up and went. I was, and still am, so glad that I did.

I find your gemini take on Tuttle refreshing.As usual you let us fill in the blanks.

I think I get the problem with people who when faced with a challenge or choice are more interested in having it their way than getting it right, but from what this story says, Tuttle would seem to be focused on and achieving both, which I would think makes him who he is, and the work what it is. That he is so fiercely intent on both allows his work to transcend that narrative, to take off, so that what we get is free of it.

His work would seem to be too good for him. He is that sin eater, the old fashioned artisan, working in the mines, like the baker black from the ovens, his work pastries for the fops and dandies, wasted on princesses and dukes and barons. Trinkets for their entertainment and delight. But for him they are out there to do his bidding, viruses, Trojan horses, sleeper spies, that will change the world.

There may be something obsessive about the man, but the work is spared.