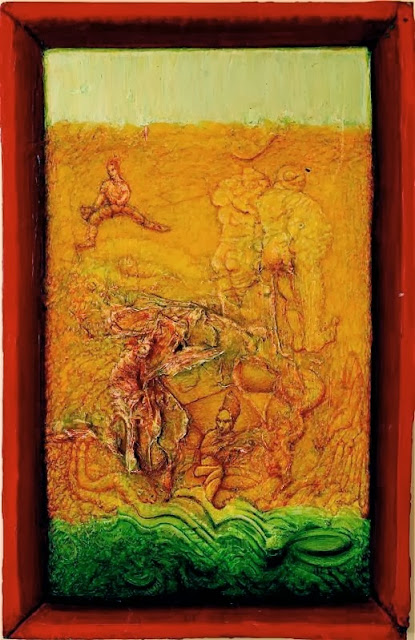 The Ghost of Gregory Gillespie


There are people others like to talk about, and then there are those that demand a whisper. The first time I heard Gillespie’s name in 1971, I overheard it. Two of my high school art teachers stood off in a corner and privately exchanged war stories about someone on the outside really doing it. It wasn’t very often that these two spoke about another artist with anything more than disdain, so I took note. Hushed awe has always preceded Gregory Gillespie's name, and among artists, he is legend.

A few springs ago he killed himself. It shocked the art world. It was right after a back-breaking late snow, and not long after a major traveling retrospective of his work. Beneath a gaudy feature on dating at the Museum of Fine Arts, the Boston Globe ran a small acknowledgment of the artist’s life and death with a reproduction the size of your thumb. It hurt. This had been arguably New England’s greatest living artist, one it could genuinely claim. Art did not come over on the Mayflower, I like to say, but in true Yankee fashion, this man was a maverick. He walked his own walk, his own path, and from stem to stern he was his own artist.

I never met the man. I tried to avoid meeting most artists, especially the celebrated ones. I never wanted to be disappointed. I never wanted anything to interfere with the work. You could really like what someone did but somehow know that you didn’t want them in your kitchen. The last thing I heard about Gillespie before he died was from John Baker, the director of his Boston gallery. He and his wife, Nina Nielsen, had been to visit him and their impression was that he had seemed to have lost his grip, that he seemed to be unable to distinguish between art and life, that he was painting on everything, even the walls and fixtures in the bathroom. Baker said that as they drove away they were both shaking their heads. It is also worth noting that he always felt that the guy was totally "benign."

It is hard, pointless, and mean to try to categorize Gillespie. You could say that his work was figurative, but it didn’t fit in with the figurative art of the early seventies, when beleaguered figuration enjoyed a brief moment in the art world sun. Gillespie was a recipient of the Prix de Rome, and there is no question that his work would be forever influenced by that experience, but to put a finger on just what that was would be impossible. Strangely enough, however, you could go so far as to say that he was the one and only great Italian painter of the last fifty years. Since he wasn’t Italian, that might suggest how deeply he had taken that experience to heart.

So what was he? You could also argue that he was the one true artist of his generation. That he was the only artist difficult enough to own himself. He was a member of no club. There have long been murmers that Da Vinci was an alien, and if so, Gillespie was his brother from another planet. There are other hackneyed expressions which apply...the mold being broken...shattered, or that he gave new meaning to the idea of intensity, times a zillion, again, and then add lots of zeros. But no description of the way he worked would tell the story. His attention to detail, his pleasure with illusion, his blatant and simultaneous regard and disregard for “reality,” his constant self-reference, his dreamscape, his madness, his allusions to the spiritual...or better...his mysticism, his super-man painting technique, none of them do him justice. They are all just pieces of the mask. The only way to know Gillespie is to follow his paintings down the rabbit hole. Then you’re looking him square in the eye, which is as it should be.

After he killed himself I had to help one painter I knew in particular, Ulick Mahoney, get past it. He was sad, outraged, blown away. I felt the same way, but Ulick couldn’t seem to move on. Suicide is a complicated thing. If there are suggestions of mental illness, even more so. For the rest of us who put up with being an artist in these parts, it was devasting. It not only meant a lot that he chose to live here too, it meant even more that in the end he chose not to. This man had done it all, and done it his way, and it apparently wasn’t enough. What did that say for the rest of us? If it wasn’t good enough for him, how could the rest of us hope to survive and flourish? The ghost of Gregory Gillespie haunts us still. It is worth asking, however, if a life of art is its own reward. Go ahead.

Everything else is a lie.

While he was still alive I was approached to write something big about his work. I declined. I didn’t want to go there. Afterall, this was the guy who when invited to hang the work of artists he admired in a museum show, hung his own. The guy had balls. Looking at a lifetime of his work, it looks pretty clear that he may never have known the difference between fantasy and reality, or, just maybe, he's the only one who did! Now that he is dead, I wouldn’t mind telling some of his story; I just don’t know where to start.

Courtesy of Artdeal Magazine; Lincoln,MA, not far from Belchertown, after another late winter snow, 2005

From the Artdeal Magazine Archives

- Posted using BlogPress from my iPhone
Posted by Addison Parks at 10:12 PM