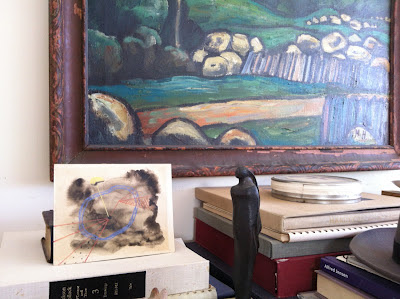 30 years ago this month I published a two page spread on Forrest Bess in ARTS Magazine. I've also lived with one of his paintings since then, and am sort of curious to know what I think about it all after 30 years. At the time I had seen a wonderful group of his little paintings, mostly from the 40's and 50's, at the Whitney in a small show on the ground floor curated by Barbara Haskell. I also saw some things at Betty Parsons. Parsons's director, Jack Tilton, let me have all of Betty's letters from Bess, and anything else they had, and for what felt like the entire winter of 1981/82, I lived and breathed this unusual artist. I had the polaroids of his operation on himself to make himself a perfect and complete being. I had letter after letter begging for money because he was broke. You see these kinds of letters at auction by artists like Manet. They are sobering. Parsons was selling Bess's paintings that are all the fuss these days for as little as $45!

Not that I object to the fuss. His work knocked my socks off from the minute I saw it. I just didn't know what to make of it. Still don't. And that doesn't matter. I think my good friend at the time Doug Welch first recommended that I check out these strange little powerhouse paintings by the fisherman savant. Doug had a great eye and was always steering me in the right direction. He was a painter working for the Bernard Jacobson Gallery while I was helping Joe Fawbush at Brooke Alexander. We were always scouting around, mining for gold, and he knew that I was writing for Arts, which was how we met. Bess was the motherlode. He appealed to the painter in all of us. He was a kind of alter ego artist. Someone who brought out the "what the heck" in us. Someone really raw at a time when raw was the order of the day. The word spread and very quickly Bess was the man.

Just shows how crazy things were, and of course still are. Serious. And seriously crazy! Bess was raw and doing his thing. The painting that I have of his sits next to a Marsden Hartley Dogtown painting. Now there is a pair! Two wonderfully strange birds, and great painters! Three cheers for both!

Yes I think Bess is a great painter. I don't care about the other stuff, the strange bird, the private life; I didn't care then and I don't care now. Not because I don't believe there is a connection and not because I love art so much that I can overlook the means to justify the ends. I just believe the work has meaning and power regardless. No one else got hurt. The work transcends the ick! Maybe that is it in a nutshell! The work is as transcendent as transcendent can be. It defines transcendence, which is what every artist strives for. From da Vinci to van Gogh to Kahlo to Hartley!

And of all of them Bess is the purest, rawest butterfly! The fact that he tried to achieve it in real life should come as no surprise.
Forrest Clemenger Bess was unlike any artist before or since. Maybe Roberta Smith is correct to object to a market driven revival, but the road to hell is paved with good intentions and the one to heaven with bad. Some people want to make a lot of money. So what else is new? Ultimately it can't touch who Bess was and what he did. He was the Real McCoy. Parsons recognized that. Also difficult, but who isn't?

Richard Tuttle had worked for Parsons and was only too familiar with Bess and his work. When I told him I was shacked up reading Jung and writing about Bess he lamented the advent of psychology. He said that it just opened a can of worms. When I mentioned the Polaroids Bess took of his naked crotch and sent to Betty, he chuckled and remarked that Bess was just some guy who literally wanted to screw himself. For what? For self love? For completion?

If Richard Tuttle is our greatest living ineffable artist, Forrest Bess was his father and the father of the rest of us. He is Mr Ineffable! The Fisherman King of the ineffable! And that is all I have to say about that!
Posted by Addison Parks at 8:45 AM