Forget What I Just Said! 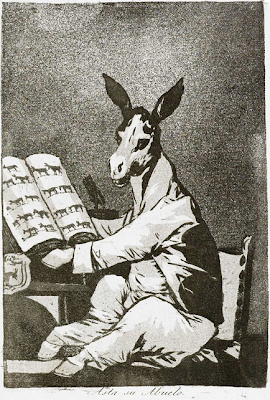 Teachers say a lot of stuff. I am continually reminded that the luckiest artists are the ones who had no teachers at all. They call teaching "passing the poison," but if there was something worse than poison, teaching would be that.
I recently discovered that Frank Lloyd Wright not only didn't graduate from college, but that there is no record of him graduating from high school either. Our greatest architect! It doesn't take much imagination to figure out that if he had studied architecture he probably wouldn't have become Frank Lloyd Wright.

Goya, arguably Spain's greatest painter, did not get into the Royal Academy of Fine Art in Madrid. Neither did Matisse the first time he applied to the Ècole des Beaux-Arts, also arguably France's greatest painter of the 20th century. When invited to lecture at Yale, Jim Dine reminded the audience that he had not gotten into the School of Art. Needless to say Yale never graduated anyone as big as Jim Dine.
When I was a little boy my father remarried to a woman who used to be a school teacher and would grade my letters to him. I would get them back with a big "D" on them. Art is a lot like a letter to your father. It is to be read and enjoyed and felt and listened to and maybe even learned from, like, so that is what he is thinking--not graded! Not just that we shouldn't grade but that it can't be done! That it is not just wrong but immoral! We grade art so much so often and so completely that we think that that is what it is all about. We do it without thinking, and we have lost our way. We have lost our way with art. All of us. And the grading is the problem. Whether an A or an F.

Why? Why do we grade? Maybe it is because we don't want to listen. We're afraid to feel. To find out what is really going on. Afraid of the deeper meaning of all things. What courses beneath the surface, in the blood of things. I'm not sure. I saw an interview with Damien Hirst on CNN the other day, and as I had met him and spoken with him many years ago I was curious to hear what he had to say. The interviewer just asked him what it was like to make a lot of money, and have a lot of money(make the grade!). Pretty unbelievable, but not when you really think about it. Still, he managed to talk about being lucky to make the art, and not about making so much money. Do I have to say that he didn't get into the Leeds College of Art and Design the first time he applied, or later Goldsmiths, University of London? Although he did end up at both. Still.

You find this out over and over again. That artists do without school. That school isn't the almighty answer everyone says it is. Learning, yes. Of course. You want to learn everyday for the rest of your life. And yet there are other places of learning besides school, and some of them are better. Maybe precisely because of the absence of grading, or teachers with grading in their hearts. Faulkner and Hemingway and London, some of our greatest writers, didn't go to college. Didn't take a creative writing class. What does this tell you? I've felt this forever, but I only found out about Wright and Goya last week. Makes me afraid for our children. Makes me afraid for my children. It is not much of a stretch to think that if some of these people went to school they might not have become what they did.

I have a son in the graduate painting program at Columbia. I knew he was strong enough and stubborn enough to survive the teaching. It would get him to New York where he could smell the paint caked up on the city's streets, a hundred years of artists from Ryder to Rothko, Gorky to Guston, de Kooning to Keith Haring, Marin to Mondrian to Motherwell to Resnick and Rauschenberg. Artists to meet. Studios to visit. Elbows to rub and heads to bang up against.

Yesterday another son of mine balked when I suggested that he get involved in music at his school. He mistook my meaning. He thought I meant get taught stuff. When I explained that I meant share what he was doing with his school mates his relief was palpable. I told him that we count on the sharing. That gifts are for giving! That that is what we get from school for all the poisoning it does us. What we get is from the other students. Really. The only time I ever got anything from a teacher was in a private moment when they shared something about themselves. Something that was really almost an aside. The smartest ones never said anything!

As a teacher and a student I have some regrets. I was aware of them at the time. I don't regret that I never went to graduate school, but I do regret that I hung around and finished RISD(the ones I admired dropped out after one year). I regret when I listened to my teachers and then when my students listened to me. My son in graduate school would never have become a painter if I had so much as whispered something in his direction. We just painted together. The most dangerous thing I ever felt as a teacher was a student that was really listening to me, you know, desperate for direction or the answer. I knew that anything I told them would by definition close a door. If they didn't find the answer out for themselves then it didn't count, and if I told them then they never would find that answer. Teaching is such a delicate process. One of encouragement, and then getting out of the way. Takes amazing discipline. The last thing you want to do is rob the world of another Frank Lloyd Wright! Yes! I really mean it! And forget what I just said!

That said, what do we do? School and grades are how we do things. It isn't easy being a teacher, let alone a good teacher. I am a big believer in not only making the best of things, but also believing that you wouldn't have anything any different, any other way--you are where you are and you have to be so tuned in to that that you can, indeed, make the best of it, no matter what it is. It is your life! Love your life! Even in the midst of your greatest challenges--this makes you who you are! If we are going to change anything, change starts from within!

We are not going to get anywhere by whining about school and grades! Accept the challenge and overcome it! Learn from the fact that despite great artists like Goya or Matisse or Damian Hirst not making the grade at first, they persevered! One way or the other. With or without school; with or without making the grade. They fulfilled themselves, their dream, their destiny! If life is an illusion, a fantasy, a sick joke, then this is ours! Do it and love it!