Larry Deyab: Return of the Native 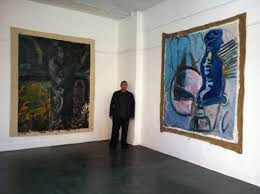 Larry Deyab has reached a really important place in painting; a place where painting can't really start until you get there: nowhere. No one really wants to end up there, but when you do, well, you let out a sigh. Milton Resnick once told Deyab that that is how you know a good painting: it makes the sound of a sigh. 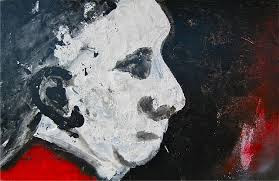 Larry Deyab is serious about painting. So much so that out of the MFA program at Columbia in the early Eighties he apprenticed himself to two of the best we've had, two painter's painters, Bill Jensen and Milton Resnick. As their assistant he mopped up, all the while soaking up their greatness. 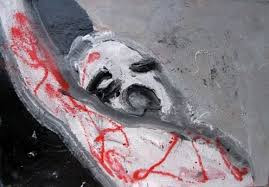 Greatness was his destination back then, it was the plan, plan A, the only plan, the don't mess with my plan plan, but now that he has matured, and it is nowhere that lets him not only paint, but be himself, and make the paintings that he knew were inside of him, perhaps even the greatness that he knew was inside of him. 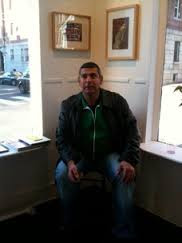 He looks back on that work he did when he was caught up in being great, when he was a New York painter, and he sees contrivance. He looks at the paintings he is doing now in Cambridge, the place of his upbringing(home?) that has for the moment inconveniently derailed him and he sees paintings that just are: just right. 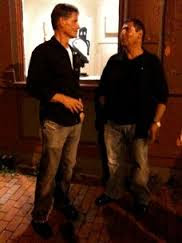 These are the paintings he has always wanted to paint. In them he sees it all, paintings that tap into it all and reflect it all: dreams, culture, politics, poetry, religion, yes, all of humanity, love, fear, longing, suffering, and humor. A lot of humor. Surprising humor. Sly humor. Sardonic humor. Absurd humor. Ironic humor! The outright shake your head at the crazy way life does its thing humor. Black comedy stalking The Divine Comedy. 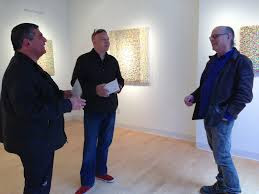 Larry Deyab has a wry smile for life. He smokes his cigars. Sometimes he drinks alone. In fifteen minutes he might do a painting that if he spent fifteen years on it wouldn't look any different. As Whistler pointed out: fifteen minutes, yes, but a lifetime of experience. 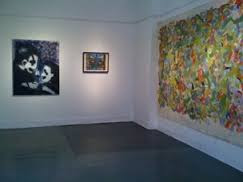 Is the work cinematic? Yes. Videographic? Yes! Motion? Yes! Still? Yes! Blur. Blurred in ways that keeps the eye in flux like a camera that can't establish automatic focus. Framed. Framed tight. The spray-painted surface flies in and out--from sharp to soft and fast and slick to brittle and rough and scattered.

The freshest canvasses are black and white house paint with some red spray paint. Weeks or days old. They are painted in natural light on his back porch, sometimes with very little, almost in darkness, studied in darkness, like the glow of a tv screen. They work on us that way, stamped on our retinas that way. Imposing themselves. Iconic phosphorescence. They conjure up words like Purgatory, graffiti, refugee, haunting, urban, and ear!

And then Larry Deyab reads-- all the time, mostly biographies, mostly about artists. He is looking for clues. Clues about the mystery ride that is art and about the riders, what made them go, what made them great. Right now he's staying up late, taking painkillers, and reading a new book on Turner. And he's stuck, stuck in Cambridge. Waiting to get back to somewhere, anywhere: Paris, Berlin, New York. Hoboken even. But right now, right now nowhere is a pretty good place to paint after all. From the looks of things, maybe as good as it gets. 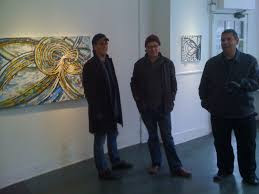