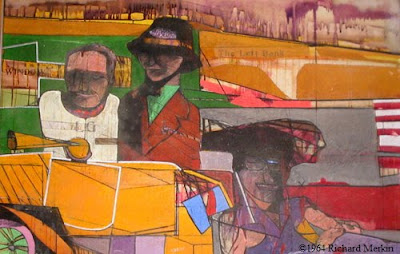 I owe Richard Merkin. A lot of people do. It is a debt we hold dear, and can never repay. It isn't so much the style thing that made him the artist and person/personality he was. And who can say if what he brought with him everywhere was that, was style? It may have looked like style, but I don't think it was. In the end what it was, unmistakably of course, was Merkin. But what was that other thing? Panache? I wonder? I think it was really something rather more simple, something more like spice, or garnish. Don't forget the garnish; life is dull without it. Without Merkin at RISD, art and life and love were a little too earnest, a little too serious, a little too posed. Merkin took posing and turned it on its ear!
Most of us have a reasonable fear of appearing the phony; Richard did not. I would have to say he was fearless beyond measure, and he could stare down anyone who might have thought him over the top without batting an eyelash. He was a true descendant of Cyrano de Bergerac! He could be at his most ridiculous and bring a kind of gravitas and bravura to it that instead made everyone else feel a little the fool. I am quite sure that I never once saw him without thinking to myself: what the hell is he wearing? The man had his own dress code! I don't know if you could say that he actually carried off life's charade, because it wasn't about that. No,that didn't matter to him. Making life grand was all that was at stake, and damn the rest! If the emperor was walking down main street in his underwear, it was Richard Merkin who made the parade a smashing success!

And it was his attention to the quality of his life that translated directly into his work; he made it interesting. And why not? That was the point. He claimed to have only painted a couple of hours a day so that the rest of his time could be spent living the life that went into them. He demanded the same of his students, and the effect was contagious. I never had him as a teacher but I knew his teaching. A painting is like a salad, he would say... And you could always recognize the work of his students: fun was the order of the day; play was rule number one; nothing if not invention! Of course, what he prized most in his own work or anyone else's was surprise, no surprise, and above all that certain je ne sais quoi! In French! Richard Merkin's work was colorful in the best sense and every sense, and so was he!

So Merkin invented a dream and lived it. Down to his hundreds of pairs of shoes! When he once said in a lecture that life was only interesting if you lived it in the basement or the penthouse, I was the little shit in the audience that asked what floor he actually lived on. The third. No matter. Mea culpa. The point was well made, and in my own way, I listened. In my own way, I have a little Merkin in me still. If we're lucky, we all do.

Posted by Addison Parks at 6:19 PM