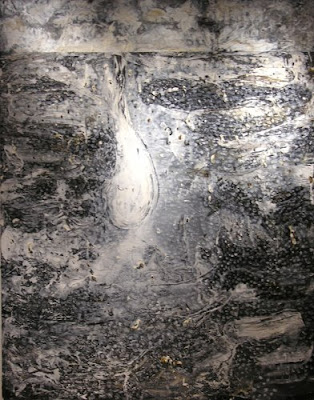 Charred, ashes, a swath of detritus spread across miles and miles of a scorched earth, flotsam and jetsam littering a muddy shore, left behind by the tide or a storm, it doesn’t matter. The elephant in the room, the desperate inner child, the man on fire; these all come to mind standing in the glow or wake or shadow of John Walker’s always epic and often towering paintings. On the other hand we get the kind of chalky radiance of frescoed starlight, the closest thing to Giotto these eyes have seen in this world, in this place, in this muddy messed up twenty-first century where less and less is what it seems, where real, the real, is anathema and truth is a joke, scoffed at, ridiculed, kicked in the gutter. And for what?

That’s probably what John Walker would like to know. Can anyone tell him? Instead he’s getting hammered, a hammer the size of a wrecking ball, driving him into the ground, driving a shaft the size of a tree trunk down his throat, telling him that lies are truth and shit is fresh cream.

These many years, these many paintings, tell this story. The call of starlight; the promise of starlight. The shit/mud/magma/primordial ooze that we stand in as we look to the stars. The shit/mud/magma/primordial ooze of a species that cares only about outward things, about power and pretense and position and posturing and primacy and prestige. That pees on everything. He is holding up a mirror. He is holding up a lamp. A lighthouse on the distant shore. Yes, it is shit. Embrace the shit if it brings you closer to the earth. Lie down in it. Lie down in darkness. But look to the heavens. Look to our better selves. Look for salvation and light.

John Walker carries his paintings in his paintings along with everything else in his life. They are of course part of his story, part of his personal mythology, so why wouldn’t they be there. Bits of shapes, words, figures of sorts that reference the things that matter to him, scars from loss and from experience, like falling from a tree or being scorned by a loved one or being bitten by a snake; and wrinkles on our face, smiles or frowns, that we get from what life washes onto our shores or rains down on us. These are all there in the paintings; relics, touchstones, stains, souvenirs, heirlooms, mementos. All the things that shape his life.

There are also his beliefs, his dreams, his hopes, his heartbreaks. It is a kind of world according to John Walker. Not much different from what we get from every artist, really, but today we’re talking about him. Because he has been there, been around, from Birmingham to Melbourne and back again. Because he has been painting and hanging it out there and leaving his mark and defying the odds and getting up and getting knocked down and getting back up again and painting and painting and painting. And it is all in the paint; trapped in its amber, laid out on its mud flats, singing its song, for all who will listen whether we're listening or not!

The first time I saw one of his paintings was almost thirty years ago. Circa 1979. A painter friend of mine and I were looking through a gallery window. A closed gallery somewhere in downtown New York. This is what I remember. We were awed by his painting. We knew his work and he was already legend. The painting was one of the monument shape series. The sort of erect phallic obelisk in the landscape that looks like something broken, at once organic and geometric. It was a figure/ground of sorts. Figure in a landscape. He wasn’t the only person doing this at that time. Other painters come to mind. But it was almost like a sculptor’s painting. Strong, powerful, solid. And yet it was also abstract. Fiercely abstract. Fiercely ephemeral. Real bravado paint; juicy, sensuous, wet, flying. Constable/Turner meets Brancusi/Stonehenge. Again, landscape and figure--horizontal and vertical. Don Quixote's windmills (the later paintings invert the shape, now female, of rebirth and resurrection, pushing down instead of up, below the high horizon--Ahab's white whale, or the pass at Thermopylae).

Over the years he has found new reasons to paint, new memories, new shapes, new dreams, new landscapes, and his legend has grown as the mythology inside the work has grown. His oeuvre has always been intense. And intensely abstract in the way that we come to them. They just act abstract. Maybe skulls, lambs, words, horizons, but abstract. They are landscape but they are flat. They have light and depth but they seem to be much more about surface and texture. They are thick and heavy and dark even brooding but they shine. These are not qualities unique to the world of painting. These are not paradoxes unique to the world of painting. Spanish painting comes to mind. Goya, El Greco, Velasquez, even Picasso. They were not afraid of darkness and they used it to make light. So does Walker. If as Richard Tuttle once reminded me, black speaks about white, and despair speaks about hope, etc, and viceversa, then this is the ground we stand on with Walker. His sprawling scatological crusts of dark paint frame the light, his little crumbs of rainbow lead us down a crevasse.

Is there rage in these paintings? It causes tectonic shifts beneath their surface, and strikes out of nowhere like a mid-western tornado. Is there longing, and poetry, and a gentle hand? Surely. Like God or Shakespeare, Walker feels all things, and gives all things. Love is like the dew, it settles on the horse turd and the rose alike--Larry McMurtry once wrote something to that effect. In John Walker’s paintings the love also falls on both. We stand before his “frescoes,” his Giottos, we look up at them, like we watch Rembrandt’s side of beef, or Lear or Macbeth splayed before us on the stage:Life's but a walking shadow, a poor player that struts and frets his hour upon the stage and then is heard no more: it is a tale told by an idiot, full of sound and fury, signifying nothing.

We are happy to witness this in the paintings. It is his plight, and in the end it is our plight. Life is a dubious experiment, as Jung said. Can we find peace with this? Should we find peace with this? Or should we be trying to talk to the manager, or whoever’s in charge? After all, what the hell is going on? Right? I’m mad as hell and I’m not going to take it anymore! Help us, Dante, help us Tom Cruise. What is this Divine Comedy? What is this existential joke/nightmare? John Walker serves up a slab of paint. It is as cathartic as Aeschylus and as searing as the deep blue sea. It rocks us. We walk away changed, and no matter whether he or anyone else knows it, we remember. Thank you, John Walker, and rock on!
Posted by Addison Parks at 1:42 PM

Hello,Its very very nice and wonderfull.
your work is so fantastic I enjoyed of your works!