Making Something of Something 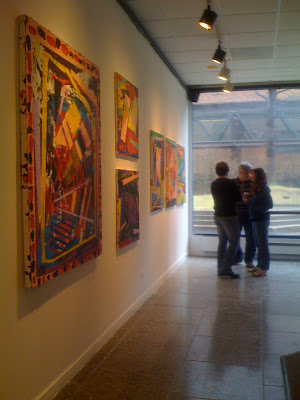 I was talking to my friend, Ulick Mahoney, at his extensive exhibition of paintings at UMASS Boston's Harbor Gallery yesterday, and one of the things he said to me was that he only felt good when he was working/painting. He may not have said it exactly like that, but that is what he in effect said. I understood.
Artists need to do what they do, to paint, or write, or compose music; to realize something about themselves and the world in some external way. People who aren't artists don't need to do this. They're fine. Artists do what they do because they have to. If they don't, they don't feel like themselves.
I was just explaining this to someone who wanted to be an artist but never got around to it. Artists, real artists, don't work that way. They can't help it. Calling them driven is wide of the mark. They have to make something to feel ok, to fill some need in themselves, to fill a hole, and it isn't about just accomplishing something either. It is about making something that connects them, grounds them, COMPLETES them. Artists are artists to complete themselves. Other people feel relatively complete already.
Which brings up another way of looking at it. Artists DO NOT understand how other people can't, don't, won't make art. They don't understand how other people can function, be happy, feel complete without making art. Artists would go crazy if they couldn't make art. Should I say crazy-er? This is what makes artists seem so arrogant to other people. It makes them seem like they know something other people don't know. It makes them act like other people have missed the boat.
Again, they can't help it. It our world of therapy, yes, we probably wouldn't have such a thing as art if everyone was NORMAL. Like Woody Allen once explained in a joke at the end of I think Annie Hall: this guy would commit his brother who thought he was a chicken but, he explained, he needed the eggs.
Ulick's show was pretty amazing. A primordial sea of color and paint and marks and shapes. A tribute to how he has completed himself through his work. He confessed that he spends every nickel he has on canvas and paint, that he scours the art stores for deals, that he is convinced he has somehow saved money when he buys a lot of supplies on sale. 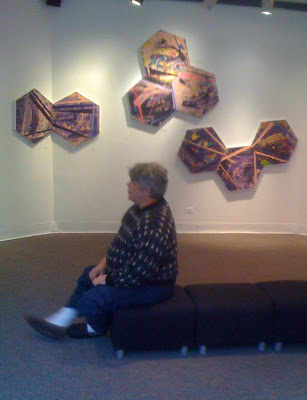 Sitting there in the gallery surrounded by his paintings he is awash in their glow; he is himself. Not as much himself as he would be if he were in his studio painting, but not bad; he gets a kind of closure, a sense of summation, a chance to take it all in and see how it adds up and maybe where it might be going.
Ulick paints with a fierce fusion of mark and marklessness. Collectively they take off, get lift off, they become almost something like a trip to a planetarium. The installation reinforces this experience of the work. Together they do more of what they already do individually. I would have to say that they indeed "add up."
So what is it about making something, making art, that completes the artist? It is more than connecting the dots, connecting with the world. One could do that in one's mind. No need to make it physical, no need to realize those connections in a concrete way.
So what is it about the physical nature of making something that to an artist is like adding an arm or a leg that everyone else already has? This completion is about something more like the way a dog marks where he has been. That was what what so interesting about graffiti art; it did that in such a direct way: Kilroy was here. Like planting a flag on the moon.
When you look at Ulick's paintings you get a sense of that. He is not just going into space, he is working it, like the sculptor he once was, and then he is leaving a record of having been there, having experienced it, but he is also leaving a record that he WAS there. That makes him feel good, feel ok with himself. He needs that for himself. Other people don't. Other people might need other things. This is what gives the artist a sense of power, of meaning, of property, even. Of security even. They have made something. It makes them feel real, worthwhile, maybe even lasting. These are their children. This is their line. It will keep them alive. It will make sense of what they were. It will prove that they were here. 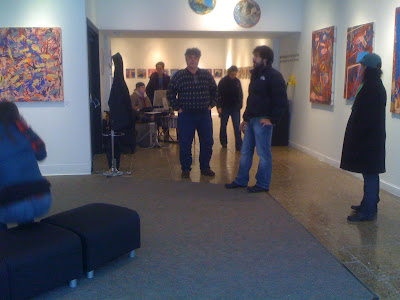 Posted by Addison Parks at 4:40 PM

Dear Addison and fellow artist....thank you Addison for the excellent commentary on my current show...there is no drama about the worksin my show or in any of the works i or have been...over the last 2 years,,i paid a high price to get to the stage in my work where it is at now...to me modernist painting is the stray animal of contempoary painting....after years of questioning all a painter goes through....as Picaaso said"We all write our own art histories"i use art making as a way of demonizing my soul....i didnt paint for 5 years...1988-1993....abstract steel sculpture had broken me..i felt i would never paint again...but epithanies happen...when i reached 43 i and Addison Parks ended up at Pearl Paint in Cambridge Mass/that was my 43 rd birth day...i haven't stopped since....about a year or so a go a mircle happened...i found in my basement the perfect studio...a sales of large canvas's was on sale..i got 12 and gave up any nothions of what i was going to due......paint came out of pint jars....i drew with tubes..as Clemet Green berg suggested one time in my youth chnge the way you work...so i went acrylic....paintings started coming out...large pallette knifes...think acrylic mediums color with out the therory..a close friend in mid 2007 came to my studio...he was shocked..something in me had changed...the paintings where the witnesss's....no shows except in my back yard....then a series of small 12"x12"acrylic on Birch panel...a series that liberated my subconscious....large scale painting involves the total body...where small intimate panels where reflections from a spiritual mirror...at 57 you keep going...your never sure the critic Greemberg told me in 1983....you go with the work to what ever area it takes to...there's nothing new in being an artist...when i went to the Van Gogh Museum i Amsterdam i was over whelmed when i left the exhibit i could feel the passion of the man....and i visited Rembrants grave...its a charity grave...one of mankinds greatest died penniless..so when does hat leave me...i out did myself but no...i painted the best art around...in my medium....triumph of abstraction...people see what they want to see...i not only see i feelthe deeper i dig into my thick irish gut....the more i need to paint...i was born in Boston and lived in South Boston till i was 5...UMASS_BOSTON is 3 miles from my heritage....i'm named for a one time Jesuit priest who as Ulick O'Mahoney brought to America vetrans of the wars with Britain....so my soul has many dimensions...James Joyce wondered about the state of the soul after death...i presumed i'll keep painting....painting the ceiling of heaven...my words can giuide you but ultimately tha painting is looking at you as Paul Klee said...there's no suffering here...just celebration ofthe human spirt..ulick mahoney 2/6/08