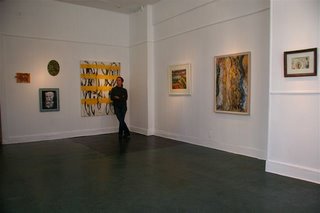 I was at Bow Street today, my wife's art exhibition space in Cambridge, and a man came in with a bit of an agenda, and that's ok. He did take the time to look at the paintings first and that was good. At first he didn't have anything to say except that only one of them was signed, which was true. It was a print. Anyway, at some point he expressed the concern that young people go into the arts with some kind of illusion about what it's going to be like and then they are disappointed. I had to stop him right there. Since when has our culture ever painted a pretty picture of what's in store if you choose to be an artist? NEVER. You might as well be deciding to grow up and be a heroin addict. From the very beginning all we get are pictures of pain and alcoholism and degradation. Warning after warning. Parents, teachers, college counselors, movies, magazines, etc. SO MUCH SO that I think people choose a life of art very often because that is what they want. Not the art, but the lifestyle of struggle and alienation. There actually could be some disappointment there if you don't achieve that dramatic result. Heaven forbid that an artist should live a happy and fulfilling life. Who would care? It would seem completely antithetical and inauthentic. The man said a lot of other "stupid" things along the same lines, but he wasn't stupid. He just repeated the same garbage that passes for knowledge of the way the arts work or the world works. Cliches, of course.

On another note I was again surprised to find someone going on about the professionalism of curators and museums and the like. I used to have the same reaction to my art history teachers who went on about their theories all the while oblivious to the fact that some human being somewhere actually bothered to think and feel and make the things that historians and museums make their livelihood from. Without the artist they would be in real estate. But you would never know it. There must be some deep-seated resentment there. It makes them keep trying to put the cart before the horse.

By the same token I had a friend of mine declare the other day that people were FINALLY starting to recognize his work, as though he deserved it somehow, as though his genius and the recognition of it was well past due( he once referred to his work as "the cause!"). This is just as crazy. He always gets himself in trouble. Expecting too much from people because of some psychotic notion that he is a great artist, dammit. He promptly alienated the woman, who was kind enough to show his work, because he made too much of the group show she would be putting him in that was months away. He dragged in a lot of paintings and didn't like the works she chose, instead wanting her to take more important and major works. Maybe she should have just gotten rid of everyone else's work and just shown his. He is the great artist afterall and these other people were just pretenders. Needless to say she finally told him to take a hike. He was outraged by her negativity. Afterall, who needs that? We can all relate to this, of course. God knows I've embarrassed myself on ocassion over the years with some arrogance in the face of a dealer.

On the other hand last summer I had a dealer beg me to let her show my work. I wasn't interested, but I wanted to honor her interest; not wanting to reject her outright the way dealers are of course quick to do with artists. In front of my friends she expressed her interests and even frustration. I never asked for anything, and even warned her that she had her hands full. I liked her. I didn't like her artists at all, which is unusual, since I am pretty easy to please most of the time. Shlocky comes to mind. Anyway, I insisted we keep things on a friendly level and left it at that. A few weeks ago I received an email from her telling me she was sorry but she couldn't show my work! Wow! What are you going to do? Amazing, of course, since I had never asked for the honor. Nevertheless I got a rejection. So there you have it!
Posted by Addison Parks at 4:46 PM