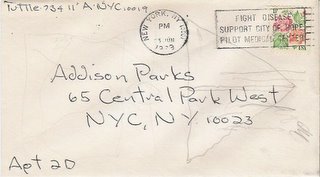 Richard Tuttle has been in the news lately. Cover of Art in America. Whitney. And why not?

The man has always been something of a mystery. Especially to himself. Watching him connect the dots through his work is like listening to someone talk to themselves. You don't understand what they're saying, and for the most part you don't want to because it's private and personal. You accept the mystery. You like the mystery. You like that there is a mystery, and in the case of Richard Tuttle, that's just what you get.

The work looks like it might be intellectual and beyond you. If it is beyond anyone it is not because it is intellectual, however. It is because it is personal. It is emotional. Perhaps. There really isn't a word for it in english. Which suggests that I know some word in some other language. I don't. I'm just not ruling it out.

The work is difficult for Tuttle, and, by most people's standards, often painful. Is it complicated? Absolutely! But in the simplest terms he can find. He was never a minimalist, however. The guy is resolutely individual. The group is too glib. He makes Thoreau seem like a frivolous social butterfly.

First and foremost the work dances the razor's edge. Originality and freshness are so important, essential, everything really, that the challenge is, again, often painful. Sometimes the frustration when the work falls short is palpable. So why does he let it out there when that happens? Who knows? Maybe in the end that says more than if he nailed something. Maybe failure is more interesting than success. Maybe success, again, is too glib, too easy, not to be trusted. To him I was always the beautiful Addison Parks, taking the easy way out. What can I say, I grew up in Rome, he grew up in New Jersey. You cannot escape these things. I am always becoming Rome. He New Jersey. And he has made it a better place, while I have only danced around it, I suspect.

Tuttle has probably always enjoyed the role of idiot-savant. The work has that bewitching quality of keeping you guessing: it is either absolutely brilliant and sublime or just really dumb. But once you accept his genius you are still in danger of overinflating the experience. You can end up guilding the lily by assigning too much or just more than the "lily" will bear. Poetry is the thing closest to this work. The domain of the ineffable. If you can get there, or better, live there, you'll be fine. Because that is what this work locates, and that is where it lives. You can't get there be studying it, by being smart, by figuring it out, by trying to get on top of it, or even eating it. It is absolutely more about what you don't do than what you do do. DO-BE-DO-BE-DO! But you don't have to DO anything. Just let the work do it all. Of course that is doing a lot. I suspect you could dance with it, just as long as you let it lead.

After all, it is all energy. Poetry in color and shape, line and mark and texture. A voice finding itself in these things. Tuttles listens very hard. And that is good. And we can thank him for that.
Posted by Addison Parks at 3:08 PM

What I know about Tuttle comes from the show we saw in NYC some years ago and the work that you have in your collection.Not much nothing comprehensive but here are my hunches about him.He reminds me of a convict who had to invent tools from whatever comes his way in the prison in order to escape.Nothing store bought,just scraps odds and ends.They have to add up no matter how primitive in the sense that they have to function somehow as a means of escape.There is a purpose to them.He is a maker not an observer.Very practical guy.Cant be thinking about beauty when your life is at stake.