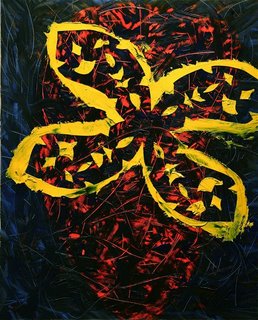 Before getting into the abstraction of the last twenty-five years, NEOAB, or neoabstraction, I would like to rant a little about another one of those negative ideas that get passed down unchecked, along the line that having a mind of your own or doing what you feel like are bad things. IMPRESSIONABLE. You know, how very impressionable he or she is, and how sad. Like this is a bad thing. That a person is moved by something or someone. Too sensitive. Too willing to listen. To consider trying something different, outside one's normal sphere of experience. It falls in the same camp as INFLUENCED. These are in direct conflict with the other two I just mentioned. If you have a mind of your own and do what you feel like, you are probably less impressionable and less likely to be influenced. Nonetheless, the idea that one could or would be influenced by forces outside oneself is not even worth discussing. We are nothing if not a lump of clay shaped by the world around us. But the idea that being unimpressionable would be considered a virtue is mind-boggling. That being easily impressed is a sign of bad character, that being influenced is a sign of weakness or perhaps a lack of character. The real question should be about which forces we allow to make an impression on us, and whether we are influenced by positive or negative energy.

One of the absolute worst things one can say about an artist is that they are heavily influenced. It is downright mean and practically indefensible. There is not an artist alive who has not been heavily influenced. The greatest artists were probably the most influenced. I just heard a story about the great Miles Davis, whose wife turned him on to rock and roll and Hendrix, and how it changed his life and his music. De kooning, Pollock, David Smith, Rauschenberg and everyone else, were influenced by Picasso, who made no secret of his influences and took it a step further by acknowledging that they were self-conscious influences, that he didn't borrow, he stole. Nevertheless, the worst thing you can still say about an artist is that they are influenced, period.

Consider the people in this world upon whom nothing makes an impression. The unimpressionable. The unmovable. By anything, especially the unprescribed, the unique. Things like children, nature, animals, art, music, literature, etc. Two things: first, what a shame; second, STOP making a virtue of the affliction.

Because if you are going to get anything out of this life you must allow yourself to be touched. The hope is in nature, in love, and in art. Let them make an impression.

The very first Modern abstractionists were an absolute lot. Malevich. Mondrian. There were hard line, hard edge for a reason. They were trying to be clear about a new language. They were starting out with building blocks. Lego. The work had a graphic quality because the language came from a graphic place. The inspiration which shaped their images came from places like design and topography. They were not interested in the wilder or even more nuanced side of the language because it served no purpose. Rational clarity was imperative if this new language was to survive. It was no different than the kind of rigid severity required by the Pilgrims to survive their first few winters in the New World. You don't take any chances.

The abstract expressionist began by literally breaking down the hard line of such clarity in favor of exploring a more irrational, personal, emotional, poetic, gestural and fluid expression. They were influenced by impressionism, collage, calligraphy, and the can of worms that was opened by the world of psychology. They wanted to go down that rabbit hole and see what they could find. Dreams, the unconscious, the emotions, these were the stuff of the first generation of Abstract Expressionism, and they crossed the line. If you want an almost instructional example of this, look at the early work of De kooning. Everyone talks about the dissolve of the figure/ground relationship in these works, but one could more easily make a case for the break down of rational abstraction. De kooning would find an edge, cross it, find it again, cross it, again and again. He would do it until he had broken it down as much as he could and still have a painting/composition/picture.

NEOAB is not another generation of abstractionists exploring the language. That is over. NEOAB is the first and following generations of artists who accept abstraction as settled law. Indeed, if the abstract expressionists were frontiersman, NEOAB are the settlers who are building a life on ground those artists before them broke. Is there any virtue in being one of these settlers? Probably not. Virtue doesn't enter into it. NEOAB are not heroes like the original abstractionists. Those guys were giants, no question about it. I would never question that or try to diminish what they accomplished. Never. I have only respect and awe for them. Those of us who follow behind them have a different set of challenges, like keeping the curiosity, the wondering of it moving. It is NOT about refinement. It is instead about doing what it takes to expand. In some ways it could be considered a significant challenge. Like the war in Iraq, it is a question of winning the peace. It is also not about preserving abstraction. While we don't want to lose it, that is a job for historians, not artists. No, it is literally about settling it. Reinventing and reinvigorating it. Bringing new meaning to the language, new testimonials, new visions, new poetry. More than keeping it alive, bringing it new life. It is an evolution. Abstraction is evolving and will keep evolving.

Who are some of these artists? Joan Snyder. Bill Jensen. Jonathan Lasker. Jennifer Reeves. Thomas Nozkowski. Elizabeth Murray. Howard Hodgkins. Jessica Stockholder. Porfirio DiDonna. Richard Tuttle. Have they been around? Yes. Have they been doing this for a while? Yes. Is it settled abstraction. Yes. Is it good. Yes.

Addison Parks said...
This comment has been removed by a blog administrator.
5:53 PM

Askinstoo said...
This comment has been removed by a blog administrator.
9:39 PM